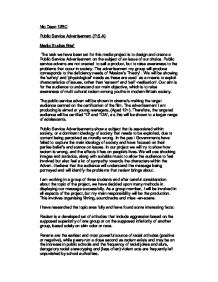 Nic Dean 12BC Public Service Advertisement (P.S.A) Media Studies Brief The task we have been set for this media project is to design and create a Public Service Advertisement on the subject of an issue of our choice. Public service adverts are not created to sell a product, but to raise awareness to the problems that occur in society. The advertisement my group will produce corresponds to the deficiency needs of 'Maslow's Theory'. We will be showing the 'safety' and 'physiological' needs as these are used as a means to exploit characteristics of issues, rather than 'esteem' and 'self-realisation'. Our aim is for the audience to understand our main objective, which is to raise awareness of multi cultural racism among youths in modern Britain society. The public service advert will be shown in cinema's making the target audience centred on the certification of the film. The advertisement I am producing is aimed at young teenagers, (Aged 12+). ...read more.

As a group member, I will be involved in all aspects of the project, but my main responsibility will be the production. This involves organising filming, soundtracks and mise-en-scene. I have researched the topic area fully and have found some interesting facts: Racism is a developed set of attitudes that include aggression based on the supposed superiority of one group or on the supposed inferiority of another group, based solely on skin color or race. Parents are the earliest and most powerful source of racial attitudes (positive or negative), while peers run a close second as racism exists and may be on the increase in public schools and the frequency of racial jokes and slurs, derogatory racial stereotyping and (less often) violent acts are frequently left unpunished by school authorities. Children from dysfunctional families are particularly susceptible to peer pressure to adopt a racist posture. They may express fear, loathing and hatred for persons who are of a different race or ethnic background. ...read more.

The narrative of the advertisement is straightforward and therefore, easy for the viewer to understand. We will use slow music towards the beginning of the advert to show the victims being tormented, and we will focus on their facial expressions to create more sadness. We will then show a series of facts related to multicultural racism. The advert will show a series of clips, with mixed race individuals, so it appeals to a large range. Towards the end of the advert, we will show a montage of clips, with a more up beat, song in the background, so the advert concludes on a happier note. I believe that our advert will be both hard hitting, and effective towards our targeted audience. As a group, we aim to create an educative production that is informative, and effective, and allows the audience to see an area of the issue that hasn't previously been portrayed. With our knowledge on the subject and through accurate research, we should be able to create a successful and accurate piece of coursework that is both educative and touching to our targeted audience. ...read more.