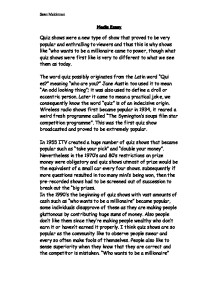 Media Essay Quiz shows were a new type of show that proved to be very popular and enthralling to viewers and thus this is why shows like "who wants to be a millionaire came to power, though what quiz shows were first like is very to different to what we see them as today. The word quiz possibly originates from the Latin word "Qui es?" meaning "who are you?" Jane Austin too used it to mean "An odd looking thing"; it was also used to define a droll or eccentric person. Later it came to mean a practical joke, we consequently know the word "quiz" is of an indecisive origin. Wireless radio shows first became popular in 1934, it reared a weird fresh programme called "The Symington's soups film star competition programme". This was the first quiz show broadcasted and proved to be extremely popular. In 1955 ITV created a huge number of quiz shows that became popular such as "take your pick" and "double your money". Nevertheless in the 1970's and 80's restrictions on prize money were obligatory and quiz shows utmost of prize would be the equivalent of a small car every four shows. subsequently if more questions resulted in too many mini's being won, then the pre-recorded shows had to be screened out of succession to break out the "big prizes. ...read more.

The layout of the studio is quite similar to the infamous "mastermind" game show. The stools that Chris Tarrant and the contestant sit on are roughly matching to the master mind one. The arena is spherical with the spectators surrounding it. This gives it a "gladiatorial" feel. A friend or family member is seated at the back the contestant so that he/she feels intimidated by having a "loved one" watching them and maybe scrutinising them, which makes the contestant feel intense. Music as well adds a lot of tension. The distinct theme tune is memorable and a representation of the show. It tries to replicate what form of programme it is. The theme tune is also tense and remarkable. The degree of the music rises as the tension increases like when Chris Tarrant is going to present the contestant the answer to their answer. During "fastest finger first" and "phone a friend" there is a clock ticking this creates tension because you only have a restricted quantity of time to do something really significant. After the contestant has answered the first five questions, which are comparatively easy, a heartbeat sound kicks in this reflects the contestant's heart beat, and how tense they feel. The show always seems to end before the end to one of the answers is revealed. ...read more.

This adds variety to the programme giving a entertaining and tranquil mood. Chris Tarrant uses a lot of techniques to generate tension. Humour is a key one. Also cutting to commercial breaks whilst contestants are about to find out whether they are right or wrong. The way Tarrant pretends the show is live makes the whole thing seem more pressured. The use of repetition is also used, like Tarrant says "Is that your final answer?" This also makes it seem additionally pressured and tense. "Who wants to be a millionaire" has been so triumphant because there has never been a game show like it prior to it that offers a million pound prize money. The show is varied and utterly different to anything on television before. It is fresh and the prize is amazing. I think that the show was first-rate when it primarily came out but it has become rather tiresome and repetitive and what was a fresh new idea seems rather tedious and droll now. I feel that the prize is too much of a sum to hand out when there are much more needier causes in the world that such money could go to rather than someone wanting to be greedy and get rich, though even if "who wants to be a millionaire" wasn't on, another show would be produced and would give the same effect and either a greater or equal sum offered as prize money. Sean Mckinnon ...read more.