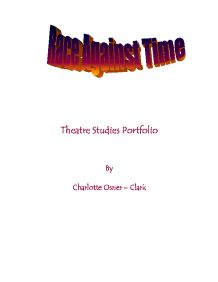 Theatre Studies Portfolio By Charlotte Osner - Clark Initial Inspirations From the start we decided to produce our piece in the style of Antonin Artaud, the French practitioner who wanted to change the way theatre was perceived and the way productions were put on, for example, he wanted to make an audience feel what was going on around them rather than think about it. We decided this as we had been studying artuad's theories as part of the AS course and had already incorporated them in a piece devised by us entitled 'Little Red Riding Hood'. We chose this as we thought an Artaudian piece would be more interesting to watch and perform than a naturalistic piece. We also wanted to incorporate some ideas from the Shared Experience Theatre Company, for example, exploring the issues of r****m and stereotyping, and using some of their rehearsal techniques, such as a belief line. We considered adapting a fairytale as we had practice with this from doing a short piece in the style of Artaud. Adapting a fairytale seemed to give is a lot of opportunity regarding the audience and their perceptions of fairytales, however, we discovered that fairytales didn't have enough in the way of a storyline or enough characters for it to be long enough, meaning that the story was too short once it had been adapted and we didn't have enough ideas to make it longer. We didn't want to start limiting ourselves at this stage so we discarded this idea and looked elsewhere. Research We started to look towards current affairs for inspiration, once we had discarded the idea of adapting a fairytale, and we focused on one of the main stories at the time, the situation in Zimbabwe with the president, Robert Mugabe and the white farmer. This led got us talking about the issue of r****m, which we all felt held a lot of potential with regard to theatre. ...read more.

As we set about devising our piece I encountered many challenges in terms of acting, theatrical presentation and resources. For example, I found it quite challenging to act as a man in one scene as I am quite a feminine person but to overcome this I tried to think like a man and show my thoughts through body posture by thinking of the stereotypical man and putting the mental image into practice which then goes back to show how the issue of stereotyping is being explored. It was also quite difficult to switch instantaneously to another, completely different role, such as, from being a white, American, twenty-year old girl, in the 1950's to being a black, American, twenty-year old girl in the 1950's as the former has to have quite a rigid body posture and not show too much emotion and be quite 'hard' with her friends and not entirely friendly. The latter has to be quite relaxed and friendly and comfortable around other people and the transition from one to the other was quite difficult for me at first but it got easier with practice and the more I did it the better the transition became. In terms of theatrical presentation, there weren't too many challenges. We did find that as a group we tended to always have something happening at the front of the space and this sometimes blocked out any action that was happening behind; this was easily overcome by switching places so that the action that was at the front was moved to the back and the action at the back was moved to the front of the space. We managed to work well with the resources we had, however, we had to improvise at the beginning because we needed a coffin for the first and last scenes but we didn't have one so we had to use a cardboard box to practice with, so that we could get an idea of how it would be with a real coffin. ...read more.

I do believe that it did convey our desired message and that it fulfilled our initial aims and objectives, i.e. making the audience feel the emotions whilst watching and then going away and thinking about what they've seen and felt. I think that the overall piece could have a few more Artaudian elements incorporated into the piece, such as, integrating the audience more with the action, however, there are Artaudian elements incorporated into the piece, for example, the spirits being the thoughts of the characters that are on stage, and the sense of incantation and crescendo if sound in the funeral scene. We also show our influence from the Shared Experience Theatre Company by including the themes of stereotyping and r****m and exploring some of the reasoning behind that r****m. I believe that I developed my acting skills adequately for the roles I had to play and tat I was relatively good at adopting a new role quickly, however, I also think that I could have thought more about specific postures and movements for one or two of the roles which, I think, is where my acting skills fell down. From devising a piece of theatre, I have learnt that it can be quite stressful at times when people strongly disagree about an aspect of the piece, and that an enormous amount of effort goes in to produce a play, not just with regards to acting but lighting and sound, costume and set as well. I learnt that every little thing needs to be thought about carefully and precisely whether that is what set to have or what movement to do at a specific time for a specific character. I also learnt that devising a piece of theatre could also be a very enjoyable experience as you spend a lot of time working with other people to produce something that conveys a complex message through a series of actions, sounds and lights. All in all I think that our piece turned out to be a very successful piece of theatre. ...read more.