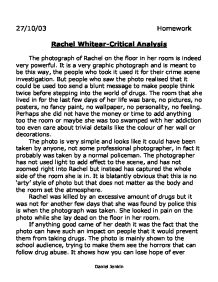 27/10/03 Homework Rachel Whitear-Critical Analysis The photograph of Rachel on the floor in her room is indeed very powerful. It is a very graphic photograph and is meant to be this way, the people who took it used it for their crime scene investigation. But people who saw the photo realised that it could be used too send a blunt message to make people think twice before stepping into the world of drugs. The room that she lived in for the last few days of her life was bare, no pictures, no posters, no fancy paint, no wallpaper, no personality, no feeling. Perhaps she did not have the money or time to add anything too the room or maybe she was too swamped with her addiction too even care about trivial details like the colour of her wall or decorations. ...read more.

She looked in pain on the photo while she lay dead on the floor in her room. If anything good came of her death it was the fact that the photo can have such an impact on people that it would prevent them from taking drugs. The photo is mainly shown to the school audience, trying to make them see the horrors that can follow drug abuse. It shows how you can lose hope of ever leading a normal life and that an addiction can eventually lead to the inevitable, death. Rachel's story shows how people can be mislead if they do not have all the facts about drugs. ...read more.

I think the song 'the drugs don't work' by the Verve could be played while the picture of Rachel dead on the floor could be shown. The poem that Rachel wrote before she died could be recited while the image of her on the floor could be shown at the same time. Finally the dance swan lake because it creates an image of pain could be used while an image of her is projected on the stage In conclusion I think that the picture is very graphic and can definitely be used to get the message of not abusing drugs across to its target audience, I doubt many people who saw the photo and knew her story would start drug-abusing. Daniel Jenkin ...read more.