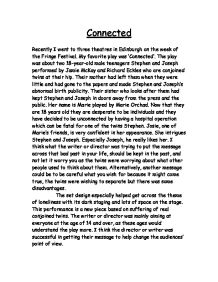 Recently I went to three theatres in Edinburgh on the week of the Fringe Festival. My favorite play was 'Connected'.

Connected Recently I went to three theatres in Edinburgh on the week of the Fringe Festival. My favorite play was 'Connected'. The play was about two 18-year-old male teenagers Stephen and Joseph performed by Jamie McKay and Richard Eckles who are conjoined twins at their hip. Their mother had left them when they were little and had gone to the papers and made Stephen and Joseph's abnormal birth publicity. Their sister who looks after them had kept Stephen and Joseph in doors away from the press and the public. Her name is Marie played by Marie Orchad. Now that they are 18 years old they are desperate to be individuals and they have decided to be unconnected by having a hospital operation which can be fatal for one of the twins Stephen. Josie, one of Marie's friends, is very confident in her appearance. She intrigues Stephen and Joseph. Especially Joseph, he really likes her. I think what the writer or director was trying to put the message across that bad past in your life, should be kept in the past, and not let it worry you as the twins were worrying about what other people used to think about them. Alternatively, another message could be to be careful what you wish for because it might come true, the twins were wishing to separate but there was some disadvantages. ...read more.

My favorite actor was Stephen because he was really the main character in this play and he really showed who his character was and he was a very lonely teenager. Their body actions, facial expressions, gestures, body language, and posture created their characters because they were mostly slouching which showed that they were sad and depressed. I enjoyed learning about them, and I understood this play because of them. I noticed that Stephen and Joseph *moved quickly* as if they are scared sometimes. Their voices were of a good clarity and this shows they had confidence with one another. One of the characters I really felt sorry for was Stephen when he was having a nightmare especially when he came across to me and looked right in my eyes and shouted furiously, "How can you do this to me Mother", this made me feel scared and frightened and I understood the anger of his feelings. Joseph also struck me as he said, "Needles in my veins...all over my body...electric shocks till we can't feel each other." The writer of the script must understand the real experiences of and reactions to conjoined twins. When I heard Stephen talk about the needles I had a picture in my head of how he felt and what was happening to him. ...read more.

Sarah was dressed in a suit and wore glasses and lots of make-up this showed she was an undercover reporter and not a new nurse because. Stephen was interested in Elvis, he played his songs frequently and this showed he had some interests. When Stephen and Joseph slept they started hugging and letting go and continuing this while slow music with chimes was played, this showed that they had concerns about the separation and if they should have this operation or not. I enjoyed this because I understood how they felt about this operation coming up and I knew that they weren't sure especially Joseph as he showed this while he wasn't dreaming as well while Stephen acted brave and not bothered. This performance is one of the best plays I have ever seen because it had a very good use of all the theatre arts. My favorite part of this performance was when Stephen and Joseph were dreaming. The lighting came into effect very good use and helped the audience understand what was going on. The use of staging was brilliant as we were on the same level as the actors. I would definitely recommend anyone over the age of 14 to go watch this performance because it is fantastic to learn from and have that experience of being able to watch the most important part of the twins life. By Hannah Young ...read more.