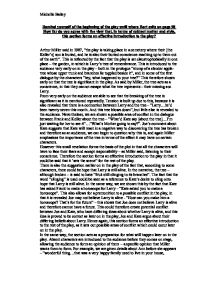 Remind yourself of the beginning of the play until where Bert exits on page 98 How far do you agree with the view that, in terms of subject matter and style, this section forms an effective introduction to the play?

Remind yourself of the beginning of the play until where Bert exits on page 98 How far do you agree with the view that, in terms of subject matter and style, this section forms an effective introduction to the play? Arthur Miller said in 1987, "the play is taking place in a cemetery where their [the Keller's] son is buried, and he is also their buried conscience reaching up to them out of the earth". This is reflected by the fact that the play is set claustrophobically in one place - the garden, in which is Larry's tree of remembrance. This is introduced to the audience very early on in the play - both in the prologue "stump of a slender apple-tree whose upper trunk and branches lie toppled beside it", and in some of the first dialogue by the characters "hey, what happened to your tree?" This therefore shows early on that the tree is significant in the play. As said by Miller, the tree acts as a conscience, in that they cannot escape what the tree represents - their missing son Larry. From very early on the audience are able to see that the breaking of the tree is significant as it is mentioned repeatedly. Tension is built up due to this, because it is also revealed that there is a connection between Larry and the tree - "Larry...he'd been twenty seven this month. And this tree blows down", but little else is revealed to the audience. Nevertheless, we are shown a possible area of conflict in the dialogue between Frank and Keller about the tree - "What'd Kate say [about the tree]...I'm just waiting for her to see it"..."What's Mother going to say?". ...read more.

Bert also acts as a way of revealing Joe's character. For example, when Joe is playing with Bert, he acts in a very fatherly way in that he plays along with Bert - "I made them go away because you [Joe] were sleeping...I'm liable to make you [Bert] a detective". Joe is very talkative and lively with Bert, which is a contrast to the way he interacts with his son Chris - "see what happened to the tree...yeah". Therefore it could be said that this section allows us to see how Joe treats Bert like a son, and perhaps treats Chris less like a son. It could therefore be argued that Joe may have shown love for Larry in the way that he shows love for Bert. This idea is shown later on in the play when Joe suggests Larry is a better son than Chris - "If Larry was alive he wouldn't act like this...he listened to me...this one, everything bothers him". Therefore the section is an effective introduction in that it sets ideas of what characters are like in the minds of the audience, which will be revisited later on in the play. The idea of contrast is also introduced in this section, for example as the sudden change from Joe and Chris' 'serious' conversation, to Joe joking and playing with Bert - "what's mother going to say...Ha! Bert's here" This is shown repeatedly throughout the play for example when Mother changes her moods very rapidly from joking and chatty, to serious. Therefore the section acts as a very effective introduction as it sets the mood for the rest of the play. ...read more.

The section is therefore an effective introduction to "All My Sons" as it includes points that an audience can begin to question from very early on in the play, which link to later events. For instance, the fact that the Keller's have a nice house, links to the fact that Joe shipped out faulty cylinder heads in order to keep the business running and make money. Therefore, this section forms a very effective introduction to the play, as it introduces absent characters to the audience, and plants questions in their minds which helps to build up tension when details are to be revealed later on in the play. Miller uses this section to introduce ideas and themes for example realism and war profiteering, and other key ideas for instance the significance of the tree, which will link to the unfolding of the plot throughout the rest of the play. Miller sets the scene in this section and prepares the audience for the rest of the play, and in some ways he is able to cause the audience to form a particular view of events or characters, and hence shape the way they react to the revelation of the plot. For example, the fact that all the neighbours at some point come to Joe's house in this section, to simply talk to him about even simple things, shows that they must generally, genuinely like him. This therefore makes the finale of the play much worse in that he has lied to all his friends, who, on the whole, believe that he is innocent. Hence this section is an effective introduction because of the many themes and ideas it establishes. Michelle Bailey ...read more.