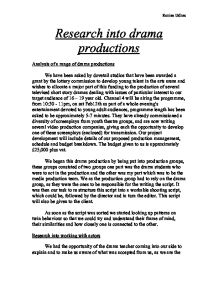 Research into drama productions Analysis of a range of drama productions We have been asked by dovetail studios that have been awarded a grant by the lottery commission to develop young talent in the arts arena and wishes to allocate a major part of this funding to the production of several televised short story dramas dealing with issues of particular interest to our target audience of 16 - 19 year old. Channel 4 will be airing the programme, from 10:30 - 11pm, on sat Feb12th as part of a whole evening's entertainment devoted to young adult audiences, programme length has been asked to be approximately 5-7 minutes. They have already commissioned a diversity of screenplays from youth theatre groups, and are now writing several video production companies, giving each the opportunity to develop one of these screenplays (enclosed) for transmission. Our project development will include details of our proposed production management, schedule and budget breakdown. The budget given to us is approximately �25,000 plus vat. We began this drama production by being put into production groups, these groups consisted of two groups one part was the drama students who were to act in the production and the other was my part which was to be the media production team. We as the production group had to rely on the drama group, as they were the ones to be responsible for the writing the script. It was then our task to re structure this script into a workable shooting script, which could be, followed by the director and in turn the editor. This script will also be given to the client. As soon as the script was sorted we started looking up patterns on twin behaviour so that we could try and understand their frame of mind, their similarities and how closely one is connected to the other. Research into working with actors We had the opportunity of the drama teacher coming into our side to explain and to make us aware of what was accepted from us, as we are the production team. ...read more.

He was full of it when we were talking about the direction but when it came to the actual shot he was not able to put into practice. He is a good director where as in showing the actor how to do a particular role, but when it came to the final matter it wasn't the way I thought it would turn out. The plus points for our director are many; he actually had a spare house in which we were able to use for our shooting. At the on set of the shooting the camera did not work and we were given a faulty tripod. Chris called his father who, very kindly let us borrow their camera and tripod, but unfortunately that tripod did not work. Chris with his own initiative repaired the college tripod and somehow we were able to progress with our shot. This was a downfall to the group because not only we were waiting continuously for the actors to show up, but also even our equipment was not working at it's best. This was a major set back, so to improve this next time I feel to make a difference to the group before taking any equipment out of college we should check it out completely, so that if there are any faults it can be rectified. Amica, a great camera lady, did her very best to understand Chris's direction and put it on film. Amica tried to get the shots, which would please me, the editor, as the final product would be in my hands. However the way Chris would explain it to her it would be totally lopsided, and Amica would end up getting all frustrated. We defiantly had a major draw back with the tripod being broken and Amica was defiantly not to blame as she was shooting with people holding the tripod for her, which made it a bit shaky. ...read more.

Audience feedback Through the forms that I have filled up from a wide range of people, the majority of the audience liked the s*x scene the best. This scene has been most appreciated and liked as it brings out a turn in the film, as there is a lightness attached to it, there is also a bit of humour to this slow moving movie. Even while I was in the editing suite with other groups doing their editing I felt that the s*x scene was most liked one and all, as it was totally different from the entire movie. The questionnaire forms also asked a question about what could be improved in this video and a lot of people felt that the child looked into the camera and stared at it for maybe a split second longer but made it feel like an hour. The lighting to an extent was also another draw back, which I feel we could not do anything about as we shot during winter, days are shorter and it gets dark pretty soon. My conclusions from all these findings are that we defiantly lost out where lighting was concerned as we shot in a house in Harlesden making it quite difficult for us to commute with the lighting and camera equipment. To make matters worse the light bulb fuse also blew making it useless having carried all the lights to Harlesden. I personally feel that the s*x scene has been very well acted and has added quite a bit of humour to the movie. The music that has been used is also befitting the film. The storyline was also straightforward and easy to understand. The part, which was not particularly liked, by the audience and me was the acting of the "mum" because she was talking too fast and no matter how many takes we did it could not be improved. ?? ?? ?? ?? Renisa Udhas ...read more.