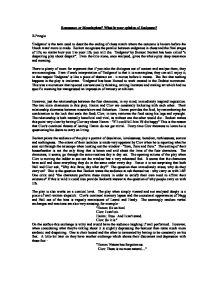 Resonance or Meaningless? What is your opinion of Endgame?

Resonance or Meaningless? What is your opinion of Endgame? B.Pringle 'Endgame' is the term used to describe the ending of chess match where the outcome is known before the 'check mate' move is made. Beckett recognises the parallel between endgames in chess and the final stages of life; no matter how you live your life, you will die. 'Endgame' by Samuel Beckett has been called "a despairing play about despair". Even the title alone, once analysed, gives the whole play deep resonance and meaning. There is plenty of room for argument that if you take the dialogues out of context and analyse them, they are meaningless. Even if one's interpretation of 'Endgame' is that it is meaningless, they can still enjoy it; in that respect 'Endgame' is like a piece of abstract art - it moves before it means. The fact that nothing happens in the play is irrelevant. 'Endgame' has been likened to work created in the Dadaist movement. This was a movement that rejected conventionally thinking, writing literature and making art which had no specific meaning but transgressed an impression of travesty or nihilism. ...read more.

One critic said "the characters perform these rituals in order to satisfy their own need to affirm their existence" If this is valid it could also provide Beckett's answer to the question of why people carry on with life. The play is also works on a comical level. The play when simply viewed and not analysed deeply is a piece of well-written slapstick. Clov's continual memory lapses and the occasional appearances of Nagg and Nell out of the bins is vaguely reminiscent of Laurel and Hardy. The seemingly random verbal exchanges and reactions are also very amusing, for example - "Hamm: Sit on him! Clov: I can't sit. Hamm: True. And I can't stand. Clov: So it is." On the surface this exchange is witty and would have the audience laughing if well performed. However, when considering what they're talking about it is slightly depressing the humour then turns much more sardonic and despairing. One is chair bound and the other is tormented by having to be constantly on his feet. A little bit later on they have another exchange which shows their discontent and depression with these fact - "Hamm: Nature has forgotten us. ...read more.

I think Beckett is implying that the only thing that finishes everything is death. The only way to be complete is to die. I feel this is backed up by the following exchange - "Clov: I couldn't finish you. Hamm: Then you shan't finish me." The design of the set also provides argument as to what the meaning of the play is. Beckett designed the set to accommodate many possible readings of the play. One could take it, as I mentioned earlier, as a nuclear bunker; this would explain the ground level windows and the deformed characters. The stage setting has also been likened to a skull, the two windows being the eyes. If this were true the characters could represent the differing departments of the brain. In this reading the entire stage and production would be a metaphor for an ageing or dying mind; evidence for this would be Clov's continual memory lapses and the death of Nell. In conclusion I do find 'Endgame' very resonant. There are many different ways of interpreting this play and Beckett invites this by the seemingly abstract dialogue. Beckett's superimposing of his ability to write comical (if slightly obscure) dialogue on top of his contrary and nihilistic attitude to life creates a very amusing yet conceptually powerful piece of drama. ...read more.