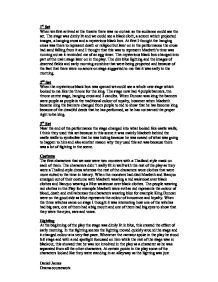 1st Set When we first arrived at the theatre there was no curtain so the audience could see the set. The stage was dimly lit and we could see a black cloth, a screen which projected images, a hanging cross and a mysterious black box. At first I thought the hanging cross was there to represent death or religion but later on in the performance the cross had sand falling from it and I thought that this was to represent Macbeth's time was running out as it reminded me of an egg timer. The mysterious black box changed into part of the main stage later on in the play. The dim blue lighting and the images of deserted fields and early morning sunshine that were being projected and because of the fact that there were no actors on stage suggested to me that it was early in the morning. 2nd Set When the mysterious black box was opened we could see a whole new stage which looked to me like the throne for the king. The stage now had 4 purple banners, the throne centre stage, hanging cross and 2 candles. When Duncan was king the banners were purple as purple is the traditional colour of royalty, however when Macbeth became king the banners changed from purple to red to show that he has become king because of the dreadful deeds that he has performed, as he has not earned the proper right to be king. ...read more.

At certain points in the play some of the characters looked like they were standing in an alleyway as the lighting was just focused in the middle of the stage, I think this was a successful piece of lighting as it made the stage seem smaller and it looked like the actors were in an enclosed space. Pyrotechnics were used when the first fighting scene was going on, but it wasn't really successful as only one side of the fireworks went off so it looked odd to the audience however if both fireworks worked correctly I think that it would have looked spectacular. Blinders were used in the play to make the characters on stage look like they are in silhouette; I also think that this was a good, creative use of lighting as it created a good effect. Sound I think the special effects on the witches voices were done very well as when the witches spoke they used movement so the audience could tell which witch was speaking at that time, the voice of the witches also created an eerie atmosphere because the voice wasn't really a normal voice and we knew as soon as we heard the voice that the creature was not human. When the Monsters were dancing at the start of the play there was a lot of quick pace music but when ...read more.

more than one character, which in some plays is fine but when the actor who was playing Banquo started talking to Macbeth as a different character, it just didn't work at all as the audience weren't to know that there was going to be a change in character at that point in the play. I think Lady Macbeth played her character well towards the end where she was going mad as I could tell that she was going mad by the way that she acted on stage however she could have been a bit louder in the earlier bits of the play. I enjoyed the performance and I thought it was a very good first time performance but I think that it lacked flow and quality, for it to be perfect though there would have to be a lot of changes for example they need to get rid of the darth vader look-alikes as murderers because they just weren't serious enough. From seeing the performance it made me think about how I should improve the quality of my own work for example I think I need to use a lot more emotion in my voice and that I need to think about what the audience is going to think about it as well and see what it looks like from their point of view. Daniel James Drama coursework ...read more.