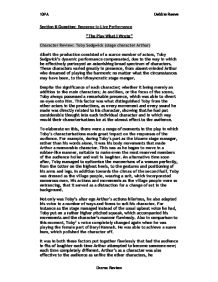 Section B Question: Response to Live Performance "The Play What I Wrote" Character Review: Toby Sedgwick (stage character Arthur) Albeit the production consisted of a scarce number of actors, Toby Sedgwick's dynamic performance compensated, due to the way in which he effectively portrayed an astonishing broad spectrum of characters. These characters varied greatly in presence, from absent-minded Arthur who dreamed of playing the harmonic no matter what the circumstances may have been, to the idiosyncratic stage manger. Despite the significance of each character; whether it being merely an addition to the main characters; Jo and Ben, or the focus of the scene, Toby always possessed a remarkable presence, which was able to divert on eyes onto him. This factor was what distinguished Toby from the other actors in the productions, as every movement and every sound he made was directly related to his character, showing that he had put considerable thought into each individual character and in which way would their characterisations be at the utmost effect to the audience. ...read more.

It was in both these factors put together flawlessly that had the audience in fits of laughter each time Arthur attempted to become someone new; each time completely different. Arthur's as a character was also effective to the audience as unlike the other characters, he acknowledged the members of the audience in the 'God's' whom were not in his direct eye line. As a result of lifting his eye line slightly, he not only made the people in the 'dress circle' feel invited into the actions of the play, he also made us the students feel as though he was talking to each and every one of us. All in all I feel as though the many varied faces of Arthur; played by Toby Sedgwick, were so effective to the audience as characters due to the individual brilliance of Toby's characterisations. This was due to the fact that he was able to fill the entire stage with his presence, which meant even the smallest movements had a big impact. ...read more.

Row C. Pizza Hut. 10 minutes..." This specific moment was uproarious, making the audience break out in laughter. On the whole I feel that Joseph Alessi portrayed his character well, however there is room for improvement. Unlike Toby's performance, personally I feel that Joseph did not fill the entire stage with his presence. This may be due to the fact that his eye level was rather more restrictive than Toby's, as he focused more on communicating with the 'dress circle', that involving the upper area in the action. Also, his tonal quality was rather monotonous compared to Arthur's varied tones. On a more positive note, I feel that Jo used the space around him more wisely than Toby, as vast movement helped Jo's character to be as interesting as it was. In conclusion I believe that even with the imperfections in the performances, Toby and Joseph alike both gave enjoyable performances, although Toby's was more memorable than the other actors'. 10PA Debbie Reeve Drama Review ...read more.