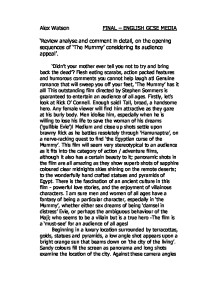 'Review analyse and comment in detail, on the opening sequences of 'The Mummy' considering its audience appeal'

Alex Watson FINAL - ENGLISH GCSE MEDIA 'Review analyse and comment in detail, on the opening sequences of 'The Mummy' considering its audience appeal'. 'Didn't your mother ever tell you not to try and bring back the dead'? Flesh eating scarabs, action packed features and humorous comments you cannot help laugh at! Genuine romance that will sweep you off your feet, 'The Mummy' has it all! This outstanding film directed by Stephen Sommers is guaranteed to entertain an audience of all ages. Firstly, let's look at Rick O' Connell. Enough said! Tall, broad, a handsome hero. Any female viewer will find him attractive as they gaze at his burly body. Men idolise him, especially when he is willing to lose his life to save the woman of his dreams ('gullible Evie')! Medium and close up shots settle upon brawny Rick as he battles resolutely through 'Hamunaptra', on a nerve-racking quest to find 'the Egyptian curse of the Mummy'. This film will seem very stereotypical to an audience as it fits into the category of action / adventure films, although it also has a certain beauty to it; panoramic shots in the film are all amazing as they show superb shots of sapphire coloured clear midnights skies shining on the remote deserts; to the wonderfully hand crafted statues and pyramids of Egypt. ...read more.

Note to audience; this will seem life threatening if they have surround sound in their front room! At the end of this scene there is a painful echoing 'ah', as the soundtrack changes from loud deafening drums, to a calm Egyptian library where a beautiful lady, Evie is filling shelves with books. The colour has changed in this scene from gold, purples and exciting shades to dull brown bookcases. The audience will find this a time to lean back and relax as the pace has changed from fast and eager to slow and convenient. There are many scenes in 'The Mummy' that have short and fast paces. The short paced sequences are created to build up tension towards the audience - whilst linking the short paced scenes onto the fast and exciting ones. In the library where Evie is minding her own business, filling shelves with brown dreary books; being gullible, let me add clumsy onto that, as she manages to use the long ladders she is standing on as a pair of stilts! (Stupid idea), as she knocks the entire shelves of books onto one another causing them all to fall down! 'Ah' she screeches as she tumbles to the floor. The viewers will assume 'argh, not another bimbo'! Well in fact she is more useful than she seems! ...read more.

This is worrying to the audience. 'What happens if beautiful Evie or Handsome Rick was to die'...? Think again, all the action and adventure-taking place in their lives... Impossible! The most important role in this film is the action and adventure. This film would be nothing without action and adventure as the title suggests 'The Mummy'! The audience will know this by looking at the title that there is a sense of creepiness with ugly mummies, to action and adventure - trying to battle against these revolting creatures. 'The Mummy' contains high-speed chases where Evie, Rick and companions are being pursued through sinister tunnels about to be eaten alive by scurrying scarabs! This would have the audience griping tightly on any kind of furniture they can get their hands on, as the tension build up is at a hurried pace! (If the audience thought that was a scary scene, wait till Rick arrives head-to-head with the formidable mummy Imotep)! Both men and women would enjoy this type of action film as it has everything they both may want. A section of romance for the ladies with the one and only hansom Rick; or for the male gender a bit of mind-strangling action to get their heart racing! 'The Mummy' is fantastic, out-of-this-world and unquestionably the best action/adventure film the human race has ever seen! ...read more.