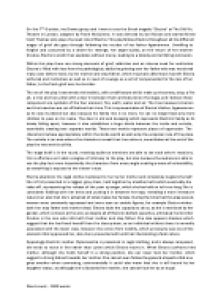 ﻿On the 7th October, my Drama group and I went to see the Greek tragedy ?Electra? at The Old Vic Theatre in London, adapted by Frank McGuiness. It was directed by Ian Rickson and starred Kirstin Scott Thomas who plays the lead role of Electra. This play follows Electra throughout all the different stages of grief she goes through following the murder of her father Agamemnon. Unwilling to forgive and consumed by a desire for revenge, her anger builds; on the return of her brother Orestes, Electra?s wrath then explodes without mercy, leading to a b****y and terrifying conclusion. Within this play there are strong elements of grief, addiction and an intense need for restitution. Electra is filled with loss from the pathological, addictive grieving over her father who was murdered many year before hand, by her mother and step-father, which traumatic aftershock has left Electra withered and motionless as well as in need of revenge as a sort of compensation for the loss of her father, to the fresh grief over her brother. ...read more.

Electra abandons the regal clothes bestowed to her by her mother and completely neglects herself. She is first presented in a ragged, grey dress, held together by a leather belts which eventually she takes off, representing the release of the pent up anger, which she has held on to for so long. She is constantly fiddling with her dress and putting it in between her legs, revealing a more immature nature but also that she?s ashamed of what makes her female. During the time that this play was set, women were constantly oppressed and were seen as unable figures, for example Electra wishes both her step father and mother dead. Electra lacks the capacity to do so, as she is restricted by her gender, which is shown at the end, as despite all of Electra?s defiant speeches, ultimately her brother Orestes is the one who kills both their mother and step father. ...read more.

Far from their being any hints of incestuous affection in this encounter between these long-lost siblings, Scott Thomas's Electra presses her nose to parts of his body and snuffles up his smell like a wild animal trying to get its bearings. This and her rapid U-turn into optimism brings a deliberate comical note to the gathering doom. In conclusion, the overall production was impressive, from Scott Thomas?s indulgently neurotic performance, which give us a first impression of an independent women who sets herself free from the previous ties and status which has oppressed her for so long from speaking up about her father?s death, however Scott Thomas slowly reveals to the audience that Electra has been maddened by grief for so long, it has trapped in an disillusioned adolescence, to the in the round stage which enables the audience to emphasis with Electra, as it adds a degree of vulnerability, as everyone is visible from every angle you look at them, from the play to the surrounding audience. Word count: - 1000 words ...read more.