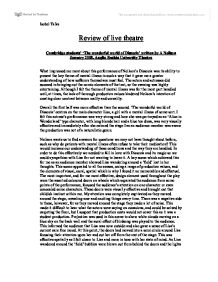 Review of live theatre Cambridge students' 'The wonderful world of Dissocia' written by A Neilson January 2008, Anglia Ruskin University Theatre What impressed me most about this performance of Neilson's Dissocia was its ability to present the key theme of mental illness in such a way that it gave me a greater understanding of how sufferers themselves must feel. The actors and actresses did succeed in bringing out the comic elements of the text, so the evening was highly entertaining. Although I felt the theme of mental illness was for the most part handled well, at times, the lack of thorough production values hindered Neilson's intention of creating clear contrast between reality and unreality. Overall the first half was more effective than the second. 'The wonderful world of Dissocia' centres on the main character Lisa, a girl with a mental illness of some sort. I felt this actress's performance was very strong and how she was portrayed as an 'Alice in Wonderland' type character, with long blonde hair ...read more.

This made it difficult to hear what the actors were saying on occasions, and could be solved by carpeting the floor, but I suspect that production costs would not cover this as it was a student production. Projection was used in this scene to show white clouds moving on a blue sky on the back wall and the aural effect of birdsong was played to the audience. This informed the audience that Lisa was now outside and also gave a sense of Lisa's current care free mood. At this point, the doors had moved into a semi circle around Lisa focusing their attention upon her and cut her off from the rest of the stage. This was effective spatially as I felt closer to Lisa and more in tune with her state of mind. As Lisa wandered around the 'field' bubbles were blown out from behind the doors and the lights dimmed as the sky projection on the back wall became sunset orange. ...read more.

However, the nurses were directed to stand facing the wings in the shadows of the stage around the circle of doors once they had left the stage. This was not naturalistic which meant that the text wasn't fully realised in the production. This therefore meant that the stark contrast between Dissocia and reality was not clearly communicated to the audience. Overall, I feel that the performance was successful at communicating information about its key theme of mental illness, but did not go as far as being able to fulfil all the writers' intentions. It was entertaining and thought provoking but was unsuccessful in that it did not provide enough of a contrast between reality and unreality in order for the audience to fully grasp the intended meaning of the play. I was left feeling I had had an entertaining evening but would not take this issue of the treatment of mental illness away with me to reflect upon as the writer would have wanted. ?? ?? ?? ?? Isobel Talks ...read more.