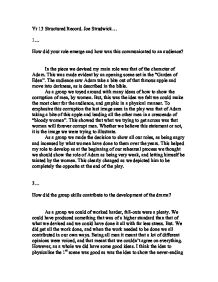 Yr 13 Structured Record. Joe Strudwick... 1... How did your role emerge and how was this communicated to an audience? In the piece we devised my main role was that of the character of Adam. This was made evident by an opening scene set in the "Garden of Eden". The audience saw Adam take a bite out of that famous apple and move into darkness, as is described in the bible. As a group we toyed around with many ideas of how to show the corruption of men, by women. But, this was the idea we felt we could make the most clear for the audience, and graphic in a physical manner. To emphasize this corruption the last image seen in the play was that of Adam taking a bite of this apple and leading all the other men in a crescendo of "b****y women". This showed that what we trying to get across was that woman will forever corrupt men. Whether we believe this statement or not, it is the image we were trying to illustrate. As a group we made the decision to show all our roles, as being angry and incensed by what women have done to them over the years. This helped my role to develop as at the beginning of our rehearsal process we thought we should show the role of Adam as being very weak, and letting himself be tainted by the women. ...read more.

The last way in which we showed versatility was having to act like women to seduce a man. This was very hard and we had to work on this for quite a while, as we were more like very camp men than women. I'm not sure how well it cam across as I felt this was the weakest part of our play. Overall I felt that we did show skills in many physical styles, which enabled us to put across a play that hopefully made the audience, laugh but also think. 6... How did rehearsals and production process contribute to the final performance? When we rehearsed we had lots of conflicts of ideas, this led to there being lots of arguments and squabbles over who was right, and what was right for the play. I felt that the only time we really rehearsed well and worked well on the play was the week and a half before the night of the performance. We worked solidly on a Sunday afternoon and for an hour each night of the week to make corrections to the bits we had thought up. Although the rehearsal process was not particularly good, our ideas and thought process wasn't too bad. We sat down for the first two weeks of the process and talked about what we were doing, we all brought in information about our ideas and did workshops for each other about what we thought. ...read more.

This is heavily influenced by social factors as we can see this change of how men don't get "food on the table" and women at their beckon call any more. 10... Explain the influence of playwrights, directors, designers or actors on your piece of work. There are not many influences in our play from playwrights, directors or actors, in fact I can only think of two. The first is that from the play "east is west" by Stephen Berkoff, where there is a motorbike chase, we looked at this bit in the play and decided that it was a clever way of doing the chase. This was to have two people crouched down with there arms up like handlebars, and person riding each of there backs. They would simulate all the dips in the road, and the corners as one. We decided this was a really nice way of showing the race and this way we could adapt it a little to be more relevant to our play with a few more testosterone fuelled words and some more movement. The only other influence on our piece that I can think of is that of the Cirque D'Soleil. I was watching a performance by this very physical circus/theatre group and suddenly had an urge to do something very physically based in our piece. I think this led me to suggest changing the opening scene, which tom also wanted to be very physical. ...read more.