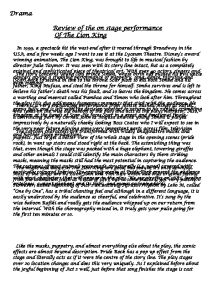 Review of the on stage performance Of The Lion King

Drama Review of the on stage performance Of The Lion King In 1999, a spectacle hit the west-end after it roared through Broadway in the USA, and a few weeks ago I went to see it at the Lyceum Theatre. Disney's award winning animation, The Lion King, was brought to life in musical fashion by director Julie Taymor. It was seen with its story line intact, but as a completely original and sophisticated piece of theatrical art. With over 40 actors, singers and dancers giving a stunning performance of puppetry, song, dance, fairytale and even humour. The story concerns young lion prince Simba, whose birth has pushed his evil uncle (Scar) back to second in line to the throne. Scar plots to kill both Simba and his father, King Mufasa, and steel the throne for himself. Simba survives and is left to believe his father's death was his fault, and so leaves the kingdom. ...read more.

The astonishing thing was that, even though the stage was packed with a huge elephant, towering giraffes and other animals I could still identify the main characters by there striking masks, meaning the masks still had the most potential in capturing the audience. The costumes of most animals were made structurally (i.e. wood) covered with exotically coloured fabrics. The opening scenes at Pride Rock present the audience with most characters that will appear in the play. We see giraffes on stilts, leaping antelopes, a giant elephant and its baby, and many swooping birds. The music and dance in The Lion King are good, but maybe it's only downfall. Most of the songs are by Elton John and Tim Rice which add that original feeling from the animation (such as 'Circle of life'), but in some places it got very patchy. However, at the beginning of Act 2 an exciting African rhythm by Lebo M, called "One by One", has a tribal chanting feel and although in a different language, it is easily understood by the audience as cheerful, and celebrative. ...read more.

The more animals that leave the stage the more skeletons appear, I saw this as a simple but effective method resembling their deaths. Other spectacular scenic effects are the must see orange paper sun and the grass that seems to grow from the stage. When leaving the theatre it was the scenic effects and lighting that had the most effect on me. The anthropomorphism (adding human characteristics to animals) in the Lion King is also seen in the play animal farm. This was an object that we had trouble overcoming, but after seeing the Lion King and Taymor's methods, I realised that I never questioned animals talking in the Lion King, which was the first thing I questioned when first exploring the script of Animal Farm. The masks, puppets, and other theatrical devices made you believe this and we became 'blind' to the fact that they were actually human actors and actresses. By Sean Kember RESEARCH: The Lion King Program (supplied at theatre) Picture sketched by Sean Kember, images taken from the internet. ...read more.