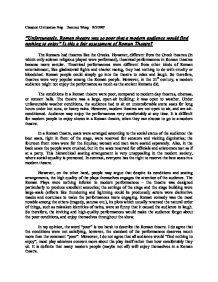 Classical Civilisation Prep Dominic Wong 8/3/2007 "Unfortunately, Roman theatre was so poor that a modern audience would find nothing to enjoy" Is this a fair assessment of Roman Theatre? The Romans had theatres like the Greeks. However, different from the Greek theatres (in which only solemn religious played were performed), theatrical performances in Roman theatres became more secular. Theatrical performances were different from other kinds of Roman entertainment, like gladiatorial fights and chariot racing, they had nothing to do with cruelty or bloodshed. Roman people could simply go into the theatre to relax and laugh. So therefore, theatres were very popular among the Roman people. However, in the 21st century, a modern audience might not enjoy the performance as much as the ancient Romans did. ...read more.

It is difficult for modern people to enjoy shows in a Roman theatre, when they can choose to go to a modern theatre. In a Roman theatre, seats were arranged according to the social status of the audience: the best seats, right in front of the stage, were reserved for senators and visiting dignitaries; the fourteen front rows were for the Equites; women and men were seated separately. Also, in the back seats the people were crushed, but in the seats reserved for officials and aristocrats met as if at a party. This hierarchical seating arrangement is very unappealing in the modern society, where social equality is promoted. ...read more.

Roman comedy was the most notable among the others (tragedy, saturae etc.), its plots which usually reversed the natural order of things, such as mistaken identities of twins, were so funny that it caused the audience to laugh. So therefore, the inviting and high-quality performances would make the audience forget about the poor conditions, and enjoy themselves throughout the show. In my opinion, the word "poor" is too harsh to describe the Roman theatre. I do agree that the conditions were not satisfying, however, the standard of the performances deserves much more than the comment "poor". Moreover, I do not agree that all audience would "find nothing to enjoy", most play admirers concern more about the play itself rather than how comfortably they sit. It is definite that many modern people (maybe not all) will enjoy themselves in a Roman theatre. ...read more.