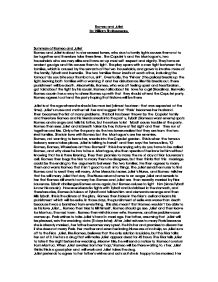 Romeo and Juliet by William Shakespeare. Summary of Romeo and Juliet Romeo and Juliet is about to star crossed lovers, who due to family fights causes them not to be together and therefore take there lives. The Capulet's and the Montague's, two households who are very alike and have an up most self respect and dignity. They have an ancient grudge and this causes them to fight. The play opens with a new fight between the families, which is caused by the servants of the two households, and grows to involve more of the family, Tybalt and benvolio. The two families throw insults at each other, including the famous "do you bite your thumb at us, sir?'. Eventually, the 'Prince' (the police) breaks up the fight, leaving both families with a warning: if another disturbance like this breaks out, there punishment will be death. Meanwhile, Romeo, who was off feeling upset and heartbroken, got told about the fight by his cousin. Romeo talks about his love for a girl (Rosaline). Benvolio Romeo cousin has a way to cheer Romeo up with that they should attend the Capulet party. Romeo agrees to attend the party hoping that his love will be there. Juliet is at the age where she should be married (almost fourteen- that was expected at the time). Juliet's nurse and mother tell her and suggest that 'Paris' becomes her husband. ...read more.

Also it shows you can't help who you fall in love with and what love can make people do, it shows that love is blind and people would die for there loved one. Genre: Romeo and Juliet could be considered to have many genres but I think the three main ones that are seen most throughout the play are; Crime / Drama / Romance, all of these and more are experienced throughout of this play Approach needed as an actor: the approach needed as an actor wasn't that hard because all of the inner thoughts and objectives were things I've felt before and most people. And it's easy to be able to remember a time when I felt this. Themes: there are three main and different themes in Romeo and Juliet: Theme 1 love Love plays an important role in Romeo and Juliet. There are many different types in this play first, there is lustful love. This is basically loved for the purpose of s****l pleasure. This type of love is also seen by the Nurse and her s****l comments to Juliet. The second type of love is obsession. Romeo thinks he's in love and moans over Rosaline. The third type of love is the one illustrated with Paris. In the play, this has to do with the fact that marriages were arranged. Paris is the one that Juliet's parents think is fit for her. In today's society, Paris can be seen as the original. ...read more.

Pause: there weren't many pauses, except on the parts when she started to daydream. Movement: the movement throughout my monologue is quite minimal she is rushing back and forward pacing, and then when the nurse enters she runs other to her so she is only really using the centre of the stage, she does come down to the front of the stage once when she is looking at the clock. Actions: There aren't really many actions used, she is really only pacing around being impatient. What I could have done to be able to use more actions is get a real actor to be the nurse so I could run other to her and touch her and beg to her and get her things so she would tell me hat he said, because in this monologue the nurse is very withheld of what he said. Character Juliet Juliet is the daughter of a very wealthy family, she is an innocent young girl, and she is extremely sheltered and obedient to her mother and father. She's the only daughter of the Capulet's, so they are very protected and controlling over her. Juliet falls in love with Romeo and has to face the lost of him because he is banished. She becomes mature and independent as the play develops. She is also very determined to be able to be with the one she loves, leaving her parents and Nurse to do what she believes is right. She is prepared to die for a loved one. ...read more.