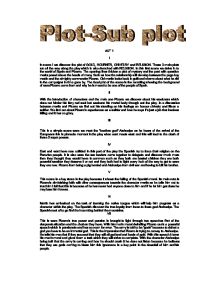 royal hunt of the sun

In scene I we discover the plot of GOLD, HOURNER, CHIVELRY and RELIGION. These 3 main plots run all the way along the play which is also drenched with RELIGION. In this first scene we delve in to the world of Spain and Pizarro. The opening lines thicken a plot of mystery and the past with question marks posed above the heads of many. Such as how the relationship will develop between the page boy martin and the almighty commander Pizarro. Old martin looks back in guilt and shame about what he did in the campaigns in time gone by. The focal pint of the scene is the recruiting showing the background of were Pizarro came from and why he is meant to be one of the people of Spain.

With the introduction of characters and the main one Pizarro we discover about his weakness which dose not hinder his fiery red soul but weakens his mortal body through out the play. In a discussion between martin and Pizarro we find out his standing on his feelings on honour chivalry and life as a solider. We find out about Pizarro’s experiences as a solider and how he says it’s just a job that involves killing and it has no glory.

This is a simple scene were we meet the “heathen god” Atahualpa as he hears of the arrival of the Europeans this is pinnacle moment in the play when east meets west and this will lead to the clash of these 2 super powers.

East and west have now collided in this part of the play the Spanish try to force their religion on the Peruvian people. It is also were the two leaders come together to delegate and discover much more then they thought they would have in common such as they both are basted children they are both powerful weather they deserve it or not and they both had to fight every inch of the way to get to were they are now. Pizarro from being a pig herded and Atahualpa from civil war and having to kill his brother.

This scene is a key stone in the play because it shows the failing of the Spanish moral. Its main note is Pizarro’s diminishing faith with direr consequences towards the character martin as he tells him not to trust him I fell that this is because of he has never had anyone close to him and if he let him get close he may lose him forever.

Martin has embarked on the task of learning the native tongue which will help him progress as a character within the play. The Spanish discover the true loyalty from Incan to there god Atahualpa. The Spanish seat of to go find the Incan king behind the mountains.

This is were Pizarro’s true power and passion is brought to light through two speeches first of the desperate situation and the choices they have. With his men’s moral dwindling Pizarro use’s a powerful speech which is passionate and has no room for error. The army is told to be “gods” because to defeat a god you have to be an immortal god. This is the impression that Pizarro is trying to convey to Atahualpa. He tells his men that if they succeed that they will all get land and loads of gold. With this speech it turns his men’s moral and gives them a task which they will strive to complete. With the character Atahualpa being told that the army is coming and how he should crush it he dose not listen because he believes that they are gods coming to bless him this ignorance is a key point in the downfall of him and his people.

This is a small scene but still has a meaning prudence and determination to succeed against god’s enemy’s even if it means defying god himself.

With the army settled at the city for the night. They set up a plan to seize the heathen god and bring his kingdom under Spanish rule. The recurring relationship between martin and Pizarro hits a high with Pizarro promising anything to martin but he refuses and says it’s enough to serve under him but then he changes his mid and asks for a sword which is only a bar of metal in Pizarro’s eyes. Diego threatens the Virgin Mary so if they don’t win he will lose his faith.

It is a simple scene about time, love and being cheated by life itself.

They march into the town and wait for 10 hours. Then they com about 3 thousand of them with all sort of weapons but they lay them down as a sign of respect to the Spanish because they believe they are gods. At the end Felipillo runs of.

Religion pops up in this scene and why their there and how their fighting for the cross and so Christianity may flourish in the area. Martin also has a discussion on how the killing is soul destroying and after the first time it dose no phase you even if it is like rivers of blood and death. This emphasise the earlier Scene II about chivalry.

This backs up the previous scene of religion and how people throw themselves in blind faith for reasons unclear to the reader and other people apart from the men present at the time. Pizarro weak education has a big impact in this part because Felipillo tries to undermine him by not translating correctly this furthers the character of martin with the promotion of royal translator. This now has provided a bond between the two leaders because they need the young martin.

With the moral of the men dwindling and a long campaign behind them with no gold to show for it the offer to Pizarro was too good to pass up. The room full of gold represents the filling of the void in many people’s lives but they think that it can be filled with greed and money. De Soto see’s the problem with realising Atahualpa and urges against it but Pizarro’s stubbiness and greed to prove himself to his father with gold takes the better of him. This goal will be reached in 2 months to fill the room with gold.

This is a sticking scene of religion and conflict between ideas, views and cultural opinions. The problem of the Christian faith with the no visible god and the Belief and not actual visible unlike the Incan god of the sun which is visible every single day. This casts a great shadow of dis-belief of Pizarro religion because in some sense the Incan religion makes more sense because it is visible which makes it more believe able. The Incan king has a problem understanding the phrase ‘love’ because women are just given to him as gifts and he dose not love any of them so asks many questions and why we use it. This is the first time in the play were we find out about the gold the Spanish are getting and how the greed has griped then men and that with tensions running high the men want to kill the Incan king because he is the anti-Christ. The character De Nizza Puts forward the idea of geed is a right that every man has and that is how men have survived because they have been greedy because all men are born unequal and have to fight for anything in life.

This is were a true connection blossoms between Pizarro and Atahualpa with the discovery of their pasts that both intertwine because they follow the same path. We connect with the mortal part of Atahualpa with a dance that he performs to Pizarro and asks him to join in after a while he dose and makes a complete fool of himself.

A question props up in the begging of the scene is what will Pizarro do about killing Atahualpa. The rest of the scene is the presentation of the gold and the squabbles between the men about how the gold sun should be shared out also how the gold will be spent when they get back to Spain.

Atahualpa and Pizarro fight and Pizarro gets beat this show that Pizarro is not unbeatable. Then he says he’s free. Atahualpa then is introduced to writing and shows it to Pizarro and asks what it is but he says he can’t read and this is important because it shows a flaw in the character of Pizarro and how a great man should be able to read and write. As the room is full Pizarro says to melt it down so it’s easier to transport. Piz and Ata talk about his freedom and because he won’t promise to not kill his men he will not let him go. In Piz’s speech he tells about how death will stop his pain all about religion and how he’s going to kill Ata.

The gold is finally given out and the men get there share. Then the subject changes on how their hanging all the Indians and when are they going to kill Ata.

There is a rumour of an army gathering in the mountains. The men bored, start gambling the gold they have got. They hear about this great general called rumi---.

The men are worried about a mutiny. The men want to go home but Pizarro use’s religion to get them to stay this is a cleaver ploy because he really just wants to be governor of the Peru area. Then later in the scene he slanders the churches and accuses the priest of consenting of the killing of all the Incan people in battle because they have been blessed. One of Pizarro’s men die’s in a fight and then the discus about killing Ata but Piz disagrees but all the camp is against him and then violence is threatened.

This is one of the two most important scenes because it is were the two religions are compared to one another about the resurrection of Ata and Jesus. He believes that the new sun will bring him back to life. Young martin dose not believe it. Piz wants this to be true so much it seems he is almost converted to their religion.

This is the last and most dramatic scene with the men deciding he was guilt and put to burning but Piz said no because that would go against his faith and a little part of him hopes that he  will come back alive in the morning. After Ata is dead Piz sits with his dead body this shows how much he really cared for him beside his body he sings the bird song. Old Martin then tells use as a reader what happened to the empire and how he has progressed in life.