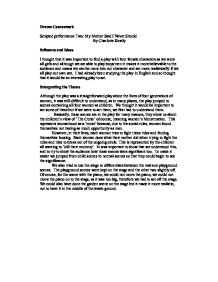 Scripted performance Two: My Mother Said I Never Should.

Drama Coursework Scripted performance Two: My Mother Said I Never Should By Charlotte Keatly Influence and Ideas I thought that it was important to find a play with four female characters as we were all girls and although we are able to play boys/men it makes it more believable to the audience and means we can be more into our character and act more realistically if we all play our own s*x. I had already been studying the play in English and so thought that it would be an interesting play to act. Interpreting the Theme Although the play was a straightforward play about the lives of four generations of women, it was still difficult to understand, as in many places, the play jumped to scenes containing all four women as children. We thought it would be important to act some of these but if we were to act them, we first had to understand them. Basically, these scenes are in the play for many reasons, they show us about the children's view of 'The Curse' of course, meaning women's Menstruation. This represents womanhood as a 'curse' because, due to the social rules, women found themselves not having as much opportunity as men. ...read more.

therefore making it a lot harder to become the character. Although this helped me to establish what my character was like, it did not help me to distinguish how my character would react when faced with different situations. For this I had to use slightly different techniques. Rehearsal Techniques As well as continually rehearsing, we had to use a number of techniques in order to make our acting 'believable'. For this, I again used some of Stanislavski's techniques, including, 'emotional' and 'sensory' memory. I particularly used this in being a child as a tried to remember what my outlook of the world was when I was that age. I also took time to watch younger children, and to see how they respond to difficult situations. I also tried to look at the way young children move, at the age of nine, they are not really very fidgety any more and they are starting to gain an understanding of life. However, they still do not know all there is to no, and get a little confused from time to time. This is also made evident within the scenes that we act. Evaluation Overall I thought my work towards the rehearsals of the play and the performance itself was good. ...read more.

We also had to do some work on our character's motives and objectives. What were the characters trying to achieve at any point of time? Each character had a purpose and a motive, what we had to work out was when and what it was. Not only did we need help structuring the mind of the character but also the body positions, again we used freeze frames which are always useful as they freeze the action which is going on and determine whether the positions of the characters bodies coincides with what is going on in their heads. Also we used character modelling where we all reshaped each others characters as they could see our positions more clearly than we could, this proved a useful exercise as this helped us choreograph the play much more thoroughly. All in all the play went pretty well. All of the actresses came across problems that they managed to overcome tremendously. I am very proud of all of us and feel that after a lot of hard work the final performance was a great success. I think that the movement and expression in the play was particularly good as everyone had mastered the movements and opinions of children and that was not an easy task to grasp. ...read more.