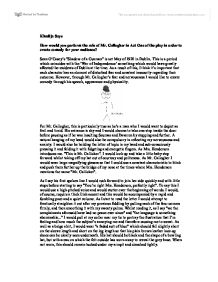 Sean OCaseys &quot;Shadow of a Gunman&quot;. How would you perform the role of Mr. Gallogher in Act One of the play in order to create comedy for your audience?

Khadija Saye How would you perform the role of Mr. Gallogher in Act One of the play in order to create comedy for your audience? Sean O'Casey's "Shadow of a Gunman" is set May of 1920 in Dublin. This is a period which coincides with the 'War of Independence' something which would have greatly affected the residents of Dublin at the time. As a result of this, I think it's important that each character has an element of disturbed fear and constant insecurity regarding their outcome. However, through Mr. Gallogher's fear and nervousness I would like to create comedy through his speech, appearance and physicality. For Mr. Gallogher, this is particularly true as he's a man who I would want to depict as frail and timid. His entrance is shy and I would choose to take one step inside the door before pausing as if he was insulting Seumas and Davoren by stepping and further. ...read more.

Henderson, perfectly right". To say this I would use a high-pitched voice and would stutter over the beginning of words. I would, of course, require a thick Irish accent and this would be accompanied by a rapid and fumbling pace and a quiet volume. As I start to read the letter I would attempt to frantically straighten it out after my previous fiddling by pulling each of the four corners firmly, and then smoothing it with my sweaty palms. Whilst reading it, as I say "we the complainants aforesaid have had no peace ever since" and "the language is something abominable..." I would pull at my collar near my tie to portray the frustration that I'm feeling and how much the subject's annoying me and therefore causing me to sweat. As well as a beige shirt, I would wear "a faded suit of blue" which should fall slightly short on the sleeve length and short on the leg length so that his plain brown leather lace-up shoes can be clearly seen underneath. ...read more.

I think that he finds people's interrogations harder than reading so as Mrs. Henderson says "Them words is true Mr. Gallicker," I would avoid eye contact whilst briefly shrugging out of modesty. He's a morally conscious man, and thus Mrs. Henderson's error of thinking "Knocksedan? That's in the County Sligo?" is humoured by him as he smiles briefly before saying "that's the very identical county." I would say this hesitantly in order to reflect my knowledge of her mistake to the audience despite my failure to correct her. My one moment of strength would be as I say "Faith and Fatherland" to Mrs. Henderson, this I would say directly to her, reflecting my only moment of confidence in myself before hurriedly running out. Mr. Gallogher is a character is a character who is completely harmless and this demonstration of his gentle kind-heartedness should aid the contrast of himself against the very strong Mrs. Henderson. ...read more.