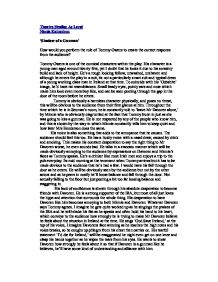 'Shadow of a Gunman' - How would you perform the role of Tommy Owens to create the correct response from the audience?

Theatre Studies As Level Nicola Richardson 'Shadow of a Gunman' How would you perform the role of Tommy Owens to create the correct response from the audience? Tommy Owens is one of the comical characters within the play. His character is a young man aged around twenty five, yet I doubt that he looks it due to his scrawny build and lack of height. He's a rough looking fellow, unwashed, unshaven and although he enters the play in a suit, its not a particularly smart suit and typical dress of a young working class man in Ireland at that time. To coincide with his 'Gobshite' image, he'd have rat resemblances. Small beady eyes, pointy ears and nose which make him look even more boy like, and can be seen peering through the gap in the door of the room before he enters. Tommy is obviously a harmless character physically, and poses no threat, this will be obvious to the audience from their first glance at him. ...read more.

His desperation to have Davoren like him becomes annoying to both Minnie and Davoren. Whatever Davoren says Tommy agrees. I imagine he gets quite worked up as he singings the praises of the IRA and he will shake his fist as he speaks and often hold his hand to his heart, which conveys to the audience how strongly he is trying to make Mr Davoren believe he feels about the situation in Ireland at the time. He sings 'God Save Ireland,' at the top of his voice, I imagine Davorens face wincing as he reaches the high notes and his voice breaks, so he coughs up phlegm from his chest then carries on. His tearful statement 'I'd die for Ireland,' will be exaggerated he night even get on one knee and clasp his hands together as he wipes the tears from his eyes. He wants to show Davoren how strongly he feels about it so that if Davoren is a gunman like he believes, he'll have some kind of understanding and alliance with him. ...read more.

He constantly mentions Mr Shields whilst taking to Davoren, thinking that this will in some way make Davoren trust him more. He may look to Minnie for back up as he says 'Mr Shields knows me well,' and glance over to her giving her a nod but all Minnie's interested in is when she's going to get that kiss. Both of them just want rid of him. He also uses physical contact to try and associate himself with Davoren. stretching out his hand and catching Devours. He will shake it furiously as a large and proud smile appears on his face. He sees Mr Davoren as a hero, and for Tommy, just meeting Davoren has been a great honour. He offers his services to Mr Davoren before he leaves 'Tommy Owens only waits the call,' raising his finger to his nose and tapping it as he leaves. I don't think that he would have to help Mr Davoren but he wants to impress Davoren at every opportunity he has, which is the purpose and reason for all of Tommy's actions within the play. ...read more.