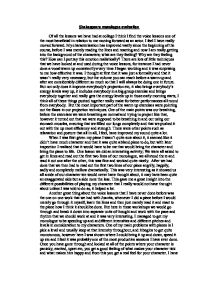 Shakespeare monologue evaluation Of all the lessons we have had at college I think I find the voice lessons one of the most beneficial in relation to me moving forward as an actor. I feel I have really moved forward. My characterisation has improved vastly since the beginning of the course, before I was merely reading the lines and reacting and now I am really getting into the background of the characters; what are they feeling? Why are they feeling this? How can I portray this emotion realistically? There are lots of little techniques that we have looked at and used during the voice lessons, for instance I had never done a vocal warm up consistently every time I began working and it was surprising to me how effective it was. I thought at first that it was just a formality and that it wasn't really very necessary, but the volume you can reach before a warm up and after are considerably different so much so that I will always be doing one in future. ...read more.

After we had done that we then had to read out the first two lines of our piece angrily, happily, sadly and completely mellow dramatically. This was very interesting as it showed us all a side of our character we would never have thought about, it may have been quite an exaggerated side but a side none the less. This gave me a great insight into the different possibilities of playing my character that I really would not have thought about unless I was told to do so, it helped a lot. Another great thing about the voice lessons that I have never done before was the one on one work that we had with Juanita, whenever I did a piece before I would merely go through it myself, learn the lines and then just merely read it and react to the piece how I think it should be done. ...read more.

The only thing that did not go so well was the performance itself; I had it all worked out, where I would go slowly, the pronunciation and where I would pick it up. All of this went to plan up until about the third line, I panicked and my mind went blank as to what I should be doing next, I reverted back to keeping it at the monotone level, it went well but not nearly as well as it could have done. If I could redo it I would calm down a lot before, I would also have warmed up a lot more and tried to focus and really get into my character before I went on so that I would not lose concentration. All in all I think it was a great course and one that I have learned a lot from. One thing that I would like is to be able to do it again with a slightly different speech and approach it with a more Stanislavski style and see what happened. ...read more.