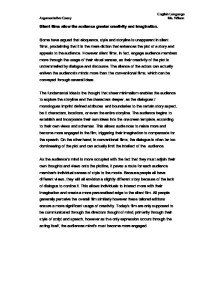 Silent films allow the audience greater creativity and imagination. Some have argued that eloquence, style and storyline is unapparent in silent films, proclaiming that it is the mere diction that enhances the plot of a story and appeals to the audience. However silent films, in fact, engage audience members more through the usage of their visual senses, as their creativity of the plot is untrammelled by dialogue and discourse. The silence of the actors can actually enliven the audience's minds more than the conventional films, which can be conveyed through several ideas. The fundamental idea is the thought that sheer minimalism enables the audience to explore the storyline and the characters deeper, as the dialogues / monologues imprint defined attributes and boundaries to the certain story aspect, be it characters, locations, or even the entire storyline. ...read more.

As the audience's mind is more occupied with the fact that they must adjoin their own thoughts and views onto the plotline, it paves a route for each audience member's individual senses of style to the movie. Because people all have different views, they will all envision a slightly different story because of the lack of dialogue to confine it. This allows individuals to interact more with their imagination and create a more personalised edge to the silent film. All people generally perceive the overall film similarly however these tailored editions ensure a more significant usage of creativity. Today's film are only supposed to be communicated through the directors thought of mind, primarily through their style of script and speech, however as the only expression occurs through the acting itself, the audiences mind's must become more engaged. ...read more.

The storyline could not be orally presented to the viewers, they were to appreciate and thus create the characters and their essences. Most silent films were of some comical basis, thus the usage of exaggeration became a useful utility in conveying messages, which could only be absorbed properly through understanding and imagination. Props would be strategically placed to trigger the correct images and thoughts, as dialogue wouldn't express these ideas to the audience. Because of this, the mind would delve deeper into the idea and understanding. The audience's appreciation for the acting and setting is upon a more thought-induced plane, allowing greater creativity of the story as a whole. Concluding, it appears that without the restricting boundaries created by dialogue, the mind's eye is enabled to delve deeper into English Language Argumentative Essay Ms. Wilson ...read more.