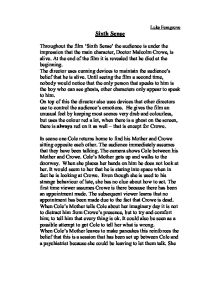 Luke Ferngrove Sixth Sense Throughout the film 'Sixth Sense' the audience is under the impression that the main character, Doctor Malcolm Crowe, is alive. At the end of the film it is revealed that he died at the beginning. The director uses cunning devices to maintain the audience's belief that he is alive. Until seeing the film a second time, nobody would notice that the only person that speaks to him is the boy who can see ghosts, other characters only appear to speak to him. On top of this the director also uses devices that other directors use to control the audience's emotions. He gives the film an unusual feel by keeping most scenes very drab and colourless, but uses the colour red a lot, when there is a ghost on the screen, there is always red on it as well - that is except for Crowe. In scene one Cole returns home to find his Mother and Crowe sitting opposite each other. ...read more.

When Cole's Mother leaves to make pancakes this reinforces the belief that this is a session that has been set up between Cole and a psychiatrist because she could be leaving to let them talk. She looks at Crowe before she leaves which suggests she knows that he is there, but she is just wondering what Cole is staring at. In Cole and Crowe's mind-reading game Crowe knows some personal facts about Cole suggesting that he has spoken to Cole's Mother. When Cole's secret is mentioned, sinister music starts playing quietly. As they speak to each other, the camera shows them from the others point of view. This scene displays the build-up of the relationship between Cole and Crowe. It also accentuates the belief that Crowe can speak to someone other that Cole. Cole's fantasy day is fulfilled later in the film, at the end of a school play. This suggests a happy ending. ...read more.

This is to show that he is becoming self-obsessed and that their relationship isn't working. When the bill for Anna's meal is brought to the table, Crowe reaches out to pick it up so that he can delay her. She picks it up before him and pays for it. As she stands up she says "Happy Anniversary." You think she is trying to hurt him but in fact she is sad because he is dead. This scene makes the audience believe that she thinks that he is paying more attention to his job than to her. Crowe actually says that he feels he is being given a second chance. The audience assumes he means with Cole, but with the twist at the end, we realise he has a second chance to let Anna know he never put her second, then he can rest in peace. The way other characters appear to speak and interact with him is a key device in maintaining the belief that Crowe is an ordinary man. Without this, the audience would notice that he only ever speaks to Cole. ...read more.