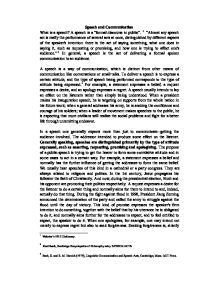 Speech and Communication What is a speech? A speech is a "formal discourse in public". 1 "Almost any speech act is really the performance of several acts at once, distinguished by different aspects of the speaker's intention: there is the act of saying something, what one does in saying it, such as requesting or promising, and how one is trying to affect one's audience."2 In general, a speech is the act of delivering a formal spoken communication to an audience. A speech is a way of communication, which is distinct from other means of communication like conversations or small talks. To deliver a speech is to express a certain attitude, and the type of speech being performed corresponds to the type of attitude being expressed.3 For example, a statement expresses a belief, a request expresses a desire, and an apology expresses a regret. ...read more.

The addressor intended to produce some effect on the listener. Generally speaking, speeches are distinguished primarily by the type of attitude expressed, such as asserting, requesting, promising and apologizing. The purpose of a public speech is trying to get the hearer to form some correlative attitude and in some cases to act in a certain way. For example, a statement expresses a belief and normally has the further influence of getting the addressee to form the same belief. We usually hear speeches of this kind in a cathedral or a party congress. They are always related to religions and politics. In the 1st century, Jesus propagates his follower the faith of Christianity. ...read more.

Seeking forgiveness is, strictly speaking, different from apologizing, even though one speech is the performance of an act of both types. As an apology, the speech succeeds if it is taken as expressing regret for the deed in question, just like the speech President Bush delivered after the shuttle of Colombia had lost. In his speech, he expressed his sincere regret for the family of the astronauts on behalf of the nation; as an act of seeking forgiveness, it succeeds if forgiveness is thereby obtained. We've once heard one speech of its kind by Clinton after the USA's attack on Chinese consul with missiles in Yugoslavia. 1 Webster's 1913 Dictionary. 2 Kent Bach, Routledge Encyclopedia of Philosophy entry SPEECH ACTS 3 Bach, K. and R. M. Harnish (1979), Linguistic Communication and Speech Acts, Cambridge, Mass.: MIT Press. ?? ?? ?? ?? ...read more.