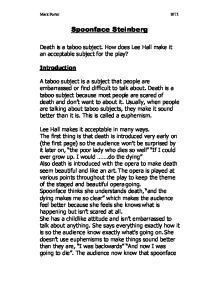 SpoonfaceSteinberg.Death is a taboo subject. How does Lee Hall make it an acceptable subject for the play?

Spoonface Steinberg Death is a taboo subject. How does Lee Hall make it an acceptable subject for the play? Introduction A taboo subject is a subject that people are embarrassed or find difficult to talk about. Death is a taboo subject because most people are scared of death and don't want to about it. Usually, when people are talking about taboo subjects, they make it sound better than it is. This is called a euphemism. Lee Hall makes it acceptable in many ways. The first thing is that death is introduced very early on (the first page) so the audience won't be surprised by it later on, "the poor lady who dies so well" "If I could ever grow up. I would .......do the dying" Also death is introduced with the opera to make death seem beautiful and like an art. The opera is played at various points throughout the play to keep the theme of the staged and beautiful opera going. ...read more.

They think that she is a genius which is good because then there isn't the feeling that Spoonface is extremely unfortunate and nothing ever goes right for her. The audience now know that Spoonface has got her own special thing that she is better at than most people which could make the audience less upset about her condition. Spoonface is not scared of death because she believes that when she dies, she will go to heaven as she believes in God, "God came and touched me on my head". This faith she has makes the death seem a lot less worse because the audience know she believes in life after death and spoonface doesn't seem to mind about the fact she is dying. Because Spoonface doesn't seem to mind dying, the audience could get mixed feelings. Either they feel better because she doesn't mind dying or they feel worse because they think Spoonface doesn't understand what dying is. ...read more.

Because Spoonface thinks these things are of equal importance, the audience are led to think that death is not really important either. Lee Hall has written this play through the perspective of a naive child (Spoonface) so he can say whatever he wants and be as blunt as he wants. There are layers of meaning throughout the play because of Spoonfaces naivety. At the end of the play, Spoonface talks about 'the sparks'. This is her idea of the point of life and death. She believes it is her destiny to be the way she is and that she has found her 'spark' and that once you find the spark there isn't any point in you being alive. The audience think that she has completed what she was put on the earth to do therefore she isn't really needed. The final point is that after reading the play, the audience gain better awareness and understanding of the play and it may alter people's perspective on life and could make more people be happy to be alive. Mark Porter 10T1 ...read more.