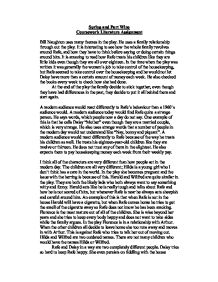 Spring and Port Wine Coursework Literature Assignment Bill Naughton uses many themes in the play. He uses a family relationship through out the play. It is interesting to see how the whole family revolves around Rafe, and how they have to think before saying or doing certain things around him. It is amazing to read how Rafe treats his children like they are little kids even though they are all over eighteen. In the time when the play was written it was generally the women's job to take control of the housekeeping, but Rafe seemed to take control over the housekeeping and he would not let Daisy have more than a certain amount of money each week. He also checked the books every week to check how she had done. At the end of the play the family decide to stick together, even though they have had differences in the past, they decide to put it all behind them and start again. A modern audience would react differently to Rafe's behaviour than a 1960's audience would. A modern audience today would find Rafe quite a strange person. He says words, which people now a day do not say. One example of this is that he calls Daisy "Mother" even though they are a married couple, which is very strange. He also uses strange words that a number of people in the modern day would not understand like "Nay, bonny and piquant". A modern audience would react differently to Rafe because of the way he treats his children as well. ...read more.

When Rafe leaves, I would have Harold stand up straight faced then say something sarcastic to Hilda about Rafe like he does in Naughton's version. The family should then have a little argument about the herring. I would have Hilda and Harold make the bet that she won't eat the herring and Wilfred sat laughing and Florence looking worried. When the parcel arrives, I would have the children and Daisy rush to see what it was. When they find out it is the coat they will all look very shocked when they see how much it cost Rafe. I think that the characters should all be sat around the dinner table. I think that Rafe should be sat by himself at the head of the table because his family treat him as though he is better than all of them. I think that Daisy should be sat closest to Rafe, but she should be sat near the kitchen in case she has to get anything from there. I also think that Harold and Wilfred should be sat opposite each other and through out the scene they should keep making sly glances and laughing together and each trying to do something to make the other one laugh. I think that Hilda should start the scene sat away from the dinner table because this shows she does not want to eat the herring. Then Florence should sit in the final seat at the table. I think that when Hilda starts to argue with Rafe, Rafe should stand up and walk around the table looking daunting. ...read more.

I personally feel as though the rest of the family love each other and Rafe, but when Rafe was horrible to Hilda about the herring, that was the final straw for the children in the family. They all found it very hard, but they thought it was the right thing to do with the children each moving out of the family house. The family sort it all out at the end of the play and the children all decided that the family was worth fighting for and they all decided to give it another go. Family life in the modern day is a lot different. Dads are a lot more reasonable to both their children and their wife. A modern day dad would not try to force his child to eat something they did not want to eat. They would also be allowed to choose what they wanted to eat, as Rafe made it clear that his house was not a cafeteria and the children should eat what they are given. The detail given about the set of the play is very important for the reader. IF a reader was reading the play and had not seen the film then how Bill Naughton writes about the set is very good. I think that when reading the play you feel as if you can see the set as Naughton gets the little details in. I think that Spring and Port Wine is a good play and I think it is an educational play as well, I think this because it gives the reader the ideas of how a 1960s family lived and how much different it is to how we live. Mark Dobinson 11Y ...read more.