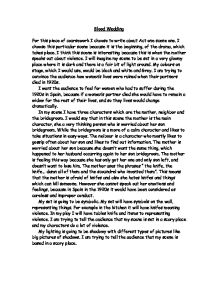 Blood Wedding For this piece of coursework I choose to write about Act one scene one. I choose this particular scene because it is the beginning, of the drama, which takes place. I think this scene is interesting because this is when the mother speaks out about violence. I will imagine my scene to be set in a very gloomy place where it is dark and there is a fair bit of light around. My colours on stage, which I would use, would be black and white and Grey. I am trying to convince the audience how women's lives were ruined when their partners died in 1920s. ...read more.

While the bridegroom is a more of a calm character and likes to take situations in easy ways. The neibour is a character who mostly likes to gossip often about her son and likes to find out information. The mother is worried about her son because she doesn't want the same thing, which happened to her husband occurring again to her son bridegroom. The mother is feeling this way because she has only got her one and only son left, and doesn't want to lose him. The mother uses the phrases " the knife, the knife... d**n all of them and the scoundrel who invented them". ...read more.