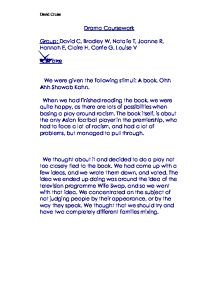 Drama Coursework Group: David C, Bradley W, Natalie T, Joanne R, Hannah E, Claire H, Carrie G, Louise V Task one We were given the following stimuli: A book, Ohh Ahh Showab Kahn. When we had finished reading the book, we were quite happy, as there are lots of possibilities when basing a play around r****m. The book itself, is about the only Asian football player in the premiership, who had to face a lot of r****m, and had a lot of problems, but managed to pull through. We thought about it and decided to do a play not too closely tied to the book. We had come up with a few ideas, and we wrote them down, and voted. The idea we ended up doing was around the idea of the television programme Wife Swap, and so we went with that idea. We concentrated on the subject of not judging people by their appearance, or by the way they speak. We thought that we should try and have two completely different families mixing. Task Two In role writing My name is Professor Dimebag Bopp III, I am a well known psychiatrist over here in the states. In march of last year I was asked to do a show over in England, in which they swapped over the wives of two completely different families in order to see how they would react to each other. ...read more.

After that, I was asked to present a summary speech to the audience, summing up what everyone has learnt over the fortnight, I was asked to keep it short, and simple, and so I did. When all of the filming was over, I went to the after-show party, where the Tongos treated us to a rather unorthodox rendition of 'You can leave you hat on'. Two days later, I returned to the States. Soon after I was sent a tape of the finished programme, and I must say, I was very pleased with the outcome. Drama mediums In our performance we used several drama mediums. We used: Sound: In our production, we used accents, and various pieces of music, to give a better atmosphere in the scenes. Lighting: We used various lighting effects in our scenes, including in the show scenes, we used lighting simulating an actual show. Space: We used space well in the show scenes, when we had each family sitting on either side of a board, so they could not see each other. Mime: We used a lot of mime during the scenes where the families were dancing with each other etc. Scene 1 Studio. The Host, (Bradley) is on stage, and introduces and quickly interviews the two families, and then introduces the psychiatrist (me) who will analyse the family's reactions to each other. The two mothers (Claire & Joanne) switch over. Conventions used: Mime Scene 2 Studio. (One week later) ...read more.

The way they performed was very professional, they knew all their lines perfectly, and also performed it perfectly. Each character had a different accent, which suited the kind of animal or character they were, e.g. the mole was very shy, and therefore spoke softly and hesitatingly. Also the toad, who is a posh and eccentric character, so he is well spoken, and speaks quite fast. They used space very well, having large, spaced out scenery, because they had a large stage to work with. They all had full costumes, and changed it whenever the scene needed it, e.g. they had posh clothes for the toad, and dirty overalls for the mole. They used mime and movement perfectly, doing exactly what the character would do when they were not speaking in real life, for example, straightening their clothes clothes, and doing things in the background. They used sound effects depending on the action happening on stage, for example, when toad is driving his car, or flying the plane. Music was also used, along with singing and dancing. They also used lighting for full effect, like when they were in the forest, they lowered the lights, and used spooky sound effects. All in all, they performed the play perfectly well, having had hours and hours of rehearsal time, and the experience of having performed it in front of an audience dozens of times, and also being able to use all of the scenery, and full props as they would be on the night of performance. By David Cruise David Cruise ...read more.