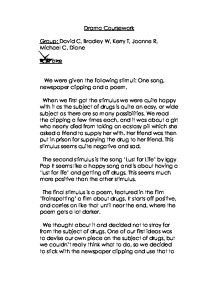 Drama Coursework Group: David C, Bradley W, Kerry T, Joanne R, Michael C, Diane Task one We were given the following stimuli: One song, newspaper clipping and a poem. When we first got the stimulus we were quite happy with it as the subject of drugs is quite an easy, or wide subject as there are so many possibilities. We read the clipping a few times each, and it was about a girl who nearly died from taking an ecstasy pill which she asked a friend to supply her with. Her friend was then put in prison for supplying the drug to her friend. This stimulus seems quite negative and sad. The second stimulus is the song 'l**t for Life' by Iggy Pop It seems like a happy song and is about having a 'l**t for life' and getting off drugs. This seems much more positive than the other stimulus. The final stimulus is a poem, featured in the film 'Trainspotting' a film about drugs. It starts off positive, and carries on like that until near the end, where the poem gets a lot darker. We thought about it and decided not to stray far from the subject of drugs. One of our first ideas was to devise our own piece on the subject of drugs, but we couldn't really think what to do, so we decided to stick with the newspaper clipping and use that to base our play around. ...read more.

All she wanted to do was make her friend happy on her birthday. I did well to convince the jury that she was simply doing a favour for her best friend, and therefore could not be blamed for the terrible consequences that were to follow. Drama mediums In our performance we used several drama mediums. We used: Sound: We used the music stimulus, in the bar scene, so the audience are aware that the scene is taking place in a bar/club. Lighting: We used bright lights in the courtroom and in the house in the last scene. We also used darker lights in the bar scene. Space: In the courtroom scene, we were all spread out across the stage, and set it out as much like a courtroom as possible, for example, judge in the middle, the solicitors on either side, defendant standing at the side, and the jury in front. Movement: We used movement well in the courtroom scene, as the solicitors are putting across their case, they are pacing up and down in-between the judge and the audience, who also act as a jury, as when I am saying my speech, I am looking at, and talking to them. Mime: We used mime in the courtroom scene, as the case for the prosecution is talking, the opposition is taking down notes, and vice-versa. ...read more.

Conventions used: Still image Task 3 Assessment Overall, I think that we performed our piece well, having completed it with few or no mistakes. I think that it was good, and it funny conveyed the story and it was easily understandable by the audience. The scene I liked the most was the courtroom scene, because of the use of mime in the background, and also the use of movement, back and forth in between the judge and the jury/audience. I also liked the scene where Kerry visited Joanne's house because of Bradley's reaction to Kerry being there, and also, because they realise that they are best of friends again. One point of improvement I will point out is that voices could've been raised a little. Everyone spoke quite quietly and I think that the play would've been improved if the actors spoke a little louder. I think all the actors in our play did very well, especially Bradley and Kerry, as they really put character into the roles they were playing. I think I also did well, but I could've spoke louder, especially during the courtroom scene. However, I think that the way the production was put together, and the way that everyone pulled together and learned their lines in time. All in all, I think we did a good show, and we improved our knowledge of putting together a play, and improved the way we use rehearsal time well. By David Cruise ...read more.