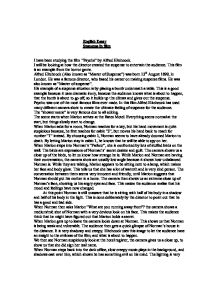 Suspense in film - I have been studying the film &quot;Psycho&quot; by Alfred Hitchcock.

English Essay Suspense in film I have been studying the film "Psycho" by Alfred Hitchcock. I will be looking at how the director created the suspense to entertain the audience. This film is an example from the horror genre. Alfred Hitchcock (Also known as "Master of Suspense") was born 13th August 1899, in London. He was a famous director, who based his career on making suspense films. He was also known as "Master of suspense". His example of a suspense situation is by placing a b**b underneath a table. This is a good example because it uses dramatic irony, because the audience knows what is about to happen, that the b**b is about to go off, so it builds up the climax and gives out the suspense. Psycho was one of the most famous films ever made. In this film Alfred Hitchcock has used many different camera shots to create the ultimate feeling of suspense for the audience. The "shower scene" is very famous due to all editing. ...read more.

The conversation between them seems very innocent and friendly, until Marion suggests that Norman should put his mother in a home. The camera then shows us an extreme close up of Norman's face, showing us his angry eyes and face. This makes the audience realise that his mood and feelings have now changed. At this point Norman is still unaware that he is sitting with half of his body in a shadow and half of his body in the light. This is done deliberately by the director to point out that he has a good and bad side. When Norman then asks Marion "What are you running away from"? the camera shows a medium/mid shot of Norman with a very devious look on his face. This makes the audience think that he might have figured out that Marion holds a secret. When Marion gets up to leave the camera looks down at Norman. This shows us that Norman is being weak and vulnerable. The audience then gets a quick glimpse of Norman's house in the distance. ...read more.

This builds up the suspense, and the audience is alerted to danger, because they know that something sinister is about to happen. When the person pulls back the shower curtain, we automatically hear uncontrollable screaming from Marion. We see an extreme close up of her face, showing her screaming in agony. The sound of the knife is very high pitched. Hitchcock has used lots of editing here, so the audience doesn't get to see too much. The camera then shows us a high angle shot of Marion swaying side to side, trying helplessly to protect herself. Then we see a medium/mid shot of her dripping with blood. After about 6 seconds the screaming finally comes to an end. We see a close up of blood going down the plug hole, and then we see Marion use her last bit of life to rip down the shower curtain. We see another close up of Marion's eye. This shows her life has now come to an end. The camera then zooms back into the bedroom, showing us a close up of the money on the table. This tells us that the stolen money is now irrelevant, because Marion is now dead! ...read more.