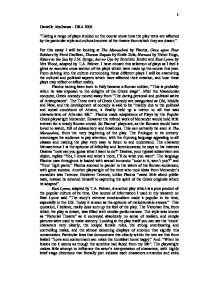 &quot;Taking a range of plays studied on the course show how the play texts are affected by the particular style and cultural context of the theatre from which they are drawn.&quot;

Danielle Abulhawa - DRA 1006 "Taking a range of plays studied on the course show how the play texts are affected by the particular style and cultural context of the theatre from which they are drawn." For this essay I will be looking at The Menaechmi by Plautus, Once upon Four Robbers by Femi Osofisan, Therese Raquin by Emile Zola, Hernani by Victor Hugo, Riders to the Sea by J.M. Synge, Aoi no Uye by Zenchiku Jinobu and East Lynne by Mrs Wood, adapted by T.A. Palmer. I have chosen this selection of plays as I feel it gives an accurate cross section of the plays which have made up the course this year. From delving into the culture surrounding these different plays I will be examining the cultural and political aspects which have affected their creation, and how these plays may reflect or affect reality. Plautus having been born in Italy became a Roman soldier, "This is probably when he was exposed to the delights of the Greek stage". After the Macedonian conquest, Greek comedy moved away from "The daring personal and political satire of Aristophanes". The Three era's of Greek Comedy are categorised as Old, Middle and New, and the development of comedy is said to be "mainly due to the political and social conditions of Athens, it finally held up a mirror to all that was characteristic of Athenian life." ...read more.

The prologue is highly motivational, with quotations like this: "Slogans about returning to the land, sermons of bourgeois morality, are empty to a man who is born condemned to poverty." And: "I hope this play shocks us into a new awareness... I hope it helps to change our attitude from passive acceptance or sterile indignation into a more dynamic more enraged determination to confront ourselves and our lives." Within the play itself you can see elements which are almost Brechtian at times, the use of the 'Song of the storyteller' for example. Regarding a section of the text in which three characters read off a list of 'scandals' there are footnotes relating to this list which read... "In production, the list should be made to include the most recent public scandals" effectively highlighting that the story of the play really is one that transcends eras of time so long as the political references are kept up to date. This also shows the flexibility of the writer; the flexibility of African theatre as a whole. The ending of the play depends on the result of the audiences opinions. Two separate endings are written. One sees the Robbers set free, and the other sees them put to death. ...read more.

I am afraid. Never again will I come as an angry ghost." Then, in order to drive the point forward even further the Ghost ends the play saying "When she heard the sound of Scripture the demons raging heart was stilled; shapes of pity and sufferance, the bodhisats v descend. Her soul casts off its bonds, she walks in Buddha's way." This theatre form seems to be incredibly moralistic and it is clear that religion exerts a dogmatic hold over the people who view such performances. The play text itself is a prime example of the Noh genre, it complies in every aspect. Out of all the plays I have chosen to cover in this essay it is interesting that despite whether the playwright has chosen to write his or her play in the cultural style of the time or to go against the grain entirely in order to produce a new style of theatre, whether the play itself adheres to the politics of a particular society or if it attempts to evoke a political stance in the audience, all are affected by their cultural, social and political circumstances. All these plays have affected the cultures from which they are drawn to a greater or lesser extent. The degree to which they have reflected their theatrical, political or cultural situation is variable and especially remarkable. ...read more.