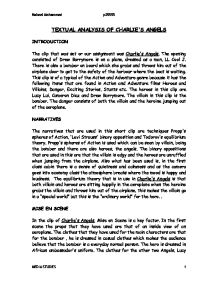 TEXTUAL ANALYSIS OF CHARLIE'S ANGELS INTRODUCTION The clip that was set or our assignment was Charlie's Angels. The opening consisted of Drew Barrymore is on a plane, dressed as a man, LL Cool J. There is also a bomber on board which she grabs and throws him out of the airplane door to get to the safety of the harbour where the boat is waiting. This clip is of a typical of the Action and Adventure genre because it has the following items that are found in Action and Adventure films Heroes and Villains, Danger, Exciting Stories, Stunts etc. The heroes in this clip are Lucy Lui, Cameron Diaz and Drew Barrymore. The villain in this clip is the bomber. The danger consists of both the villain and the heroine jumping out of the aeroplane. NARRATIVES The narratives that are used in this short clip are techniques Propp's spheres of Action, 'Levi Strauss' binary opposition and Todorov's equilibrium theory. Propp's spheres of Action is used which can be seen by villain, being the bomber and there are also heroes, the angels. The binary oppositions that are used in this are that the villain is edgy and the heroes are unruffled when jumping from the airplane. ...read more.

The airhostess looks away in disgust, so the audience can see what he thought of it. The next shot we saw was a two shot when LL Cool J sat next to the bomber. It is used because it shows both characters at the same time and they are communication to each other. The last shot we see is that of a high angle hot when they are falling from the sky because high angle shots are there to show that the character(s) are not in control of what they are doing. The camera movements that we see in the clip are pan shot, tilt, zooming in and out, steadicam and crane shot. The pan shots were all used in the aeroplane. The reason for this was to set the scene of being inside of an aeroplane. The zooming in and out shots were used when the heroine asked the villain to look at the b**b. It was used to show the audience that the b**b was working and he had it on him and it had not got long left before the plane would have exploded. ...read more.

A cabin crewmember walks quickly passed, and then we see the bombers face to the front again. The other kind of editing that they used in this clip is that the fighting scene was speeded up. When the scene was filmed it was all done in slow motion so that no one would get hurt. Then in post-production they can speed the filming up so that it looks like it was done as quick as in the clip itself. The Chromokey was finally finished in the post-production by getting the action that was filmed in front of the blue or green screen and putting the location that it was supposed to be filmed, at the back. AUDIO CODES The audio codes that have been used in this film are that they use a fast beat of music at the beginning so that it is telling the audience that something serious will be happening soon. When the heroines and villain have jumped out of the plane there is a kind off speed sound that is showing the audience that, at that moment in time everything is happening quiet quickly. Then at the end they have some calming music to let the audience know that the Angels are safe and well. Nabeel Mohammed p25555 1 1 MEDIA STUDIES ...read more.