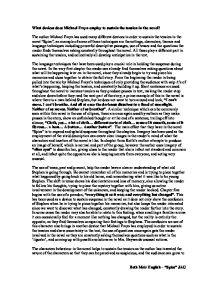 The author Michael Frayn has used many different devices in order to sustain the tension in the novel &quot;Spies&quot;

What devices does Michael Frayn employ to sustain the tension in the novel? The author Michael Frayn has used many different devices in order to sustain the tension in the novel "Spies", an example of some of these techniques are the settings, characters, themes and language techniques including powerful descriptive passages, use of tenses and the questions the reader finds themselves asking constantly throughout the novel. All these play a different part in sustaining the tension, and collectively all develop anticipation in the text. The language techniques that have been used play a crucial role in holding the suspense during the novel. In the very first chapter the reader can already find themselves asking questions about what will be happening later on in the novel, since they already begin to try and piece his memories and clues together to obtain the full story. From the beginning the reader is being pulled into the tale by Michael Frayn's techniques of only providing the audience with snip-it's of what's happening, keeping the tension, and constantly building it up. Short sentences are used throughout the novel to increase tension as they produce pauses in text, making the reader stop and slow down before they read the next part of the story, a prime example of this in the novel is where there is a man behind Stephen, but he does not want to turn around and look, "I can't move. ...read more.

out of his sight, furthermore has even torn himself away from his work to escort her, this is once more a particularly bizarre behaviour as he would never usually be seen outside of his garage. Mrs Hayward has become a prisoner in her own home. The way that Mr Hayward also talks to Keith hints that he is not quite the loving father too him either, "if that toy aeroplane touches the green house old bean', he'd smile, 'I'll cane you", the menacing tone in his voice when we hear this suggests he can be a aggressive man running on a short fuse. His behaviour helps to keep tension as it builds up suspense of the mystery of this character, as we yet still do not know much about him. The novel is set during war time Britain; this immediately creates an aire of suspicion for the reader. During the war there were many people sent over to spy on their opposing country, and anyone who began to act suspiciously and secretive may have been questioned by on-lookers. By using the war time setting it automatically makes the book more sinister and serious. It also additionally reflects on the theme of betrayal, and those individuals who did not support their country in the war, as an alternative turned to spying. ...read more.

The themes can be useful for sustaining tension in the novel as there is an aire of mystery and curiosity about them. Other themes presented to us in the novel are betrayal and the idea of secrecy. There is a great deal of betrayal seen during the book beginning with Stephen who breaks many promises, to Mrs Hayward keeping secrets from her family, which also ties in with the topic of secrecy. Michael Frayn has also included the effects of the technique 'rites of passage', which follows Stephen as the story goes on and shows the change in his social and s****l status. This maturity we see of Stephen can also be included as another theme of the novel since he begins to have more intimate relationships with Barbara Berril and Mrs Hayward, has began smoking and has now realised that it is no longer a game but infact quite serious, "I feel... something disturbing. I don't think it's sick. I think it's... a soaring sensation. I have a sense of freedom, as if im no longer bound by the rules and restrictions of childhood". The symbol of "X" throughout the story plays a vital function in maintaining the suspense. There are many questions for the audience about what the values of "X" could be, and by not knowing what it truly means the reader will want to carry on reading the book to find out. Stephen and Keith first believe that it stands for a kiss or a secret meeting arranged by Mrs Hayward. ...read more.