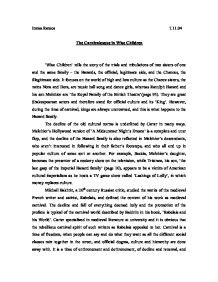 The Carnivalesque in Wise Children

Imma Ramos 7.11.04 The Carnivalesque in Wise Children 'Wise Children' tells the story of the trials and tribulations of two sisters of one and the same family - the Hazards, the official, legitimate side, and the Chances, the illegitimate side. It focuses on the world of high and low culture as the Chance sisters, the twins Nora and Dora, are music hall song and dance girls, whereas Ranulph Hazard and his son Melchior are 'the Royal Family of the British Theatre'(page 95). They are great Shakespearean actors and therefore stand for official culture and its 'King'. However, during the time of carnival, kings are always uncrowned, and this is what happens to the Hazard family. The decline of the old cultural norms is underlined by Carter in many ways. Melchior's Hollywood version of 'A Midsummer Night's Dream' is a complete and utter flop, and the decline of the Hazard family is also reflected in Melchior's descendants, who aren't interested in following in their father's footsteps, and who all end up in popular culture of some sort or another. For example, Saskia, Melchior's daughter, becomes the presenter of a cookery show on the television, while Tristram, his son, 'the last gasp of the imperial Hazard family' (page 10), appears to be a victim of American cultural imperialism as he hosts a TV game show called 'Lashings of Lolly', in which money replaces culture. ...read more.

Huh. Lovely is as lovely does; if they looked like what they behaved like, they'd frighten little children' (page 7) she says of Lady Atlanta's daughters. And, despite his lofty reputation, Dora's own father is similarly subjected to her mischievous commentary, reminding us that for all his apparent superiority and ambitions, he's as human and flawed as the rest of us. She knows that the quickest way to undermine dignity is to bring up images of copulation and defecation, so she often evokes such associations when her father enters the scene: 'I did piss myself when I saw him, in fact, but only a bit, hardly enough to satin the sofa. Such eyes! Melchior's eyes, warm and dark and sexy as inside of a London cab in wartime...those knicker-shifting, unfasten-your-brassiere-from-the-back-of-the-gallery eyes...'(page 72). Later, it is not Melchior's eyes that come under scrutiny, but some other, considerably more private parts: '...the way that Melchior filled those tights was the snag; Genghis hadn't gone to all this expense so that his wife would be upstaged by her co-star's package' (page 132). And so it is that even the head of the 'Royal Family of the theatre'(page 37) is temporarily dethroned by Dora's irreverence. Her descriptions of these and other characters are sassy and vivid. ...read more.

This enables her, as Bakhtin says, to get rid of the distance between her and her readers who are quiclkly drawn into her text. She even makes them participate actively by addressing them personally. Dora often asks the reader questions to draw him into her narrative an her speech seems so natural and full of life and verve that, as the following quotation shows, she often just goes on and on until she gest carried away and forgets where she is: 'There I go again! Can't keep a story going in a straight line, can i? drunk in charge of a narrative. Where was I?' (page 158). When, at the end of the novel, three-month old twins are presented to Dora and Nora by their uncle Perry, Nora in particular is thrilled by the prospect of raising them: '"Babies!" she said, and cackled with glee' (page 229). And so it is that the novel ends with the marvellous, memorable, utterly carnivalesque image of the laughing hags, serenading their babies in two-part harmony as they head toward their home on Bard Road. The last lines of the novel end with the optimism and joy associated with birth and renewal: 'There was dancing and singing all along Bard Road that day and we'll go on singing and dancing until we drop in our tracks, won't we kids. What a joy it is to dance and sing!' (page 231-232). ...read more.