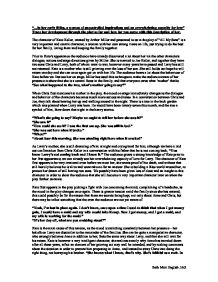 The character of Kate Keller, created by Arthur Miller and presented to us in the play of &quot;All My Sons&quot; is a very important and central character, a woman with her own strong views on life

"...in her early fifties, a woman of uncontrolled inspirations and an overwhelming capacity for love" Trace her development through the play so far and how far you agree with this description of her. The character of Kate Keller, created by Arthur Miller and presented to us in the play of "All My Sons" is a very important and central character, a woman with her own strong views on life, just trying to do the best for her family, loving them and keeping the family together. Prior to Kate's appearance the audience have already discovered a lot about her via the other characters dialogue, actions and stage directions given by Miller. She is married to Joe Keller, and together they have two sons Chris and Larry, both of whom went to war, however many years have passed and Larry has still not returned. Kate is a mother who is still grieving over the loss of her son. She still holds out hope he will return one day and she can once again get on with her life. The audience hears a lot about the behaviour of Kate before we first see her on stage. Miller has used this technique to make the audience aware of her presence to show that she is a central focus in the family, and that everyone cares what 'mother' thinks. ...read more.

In a conversation she has with Joe, we see clear evidence of her unsteady mental stage, "Because if he's not coming back then I'll kill myself! Laugh. Laugh at me. But why did that happen the very night she came back? Laugh but there are meanings in such things." The sudden loss of control is a very visible change - and quite dramatic. Kate is a very strong character in "All My Sons"; we see evidence of this on Anne's initial scene. She does not want Anne overlooking her other son Larry, and is seen to be very abrupt and to the point with her when he is mentioned. Kate grew to assume Anne thought in an alike way to her, and was not satisfied when she found out the truth, that Anne instead disagrees. "You mean am I still waiting for him? Well, I'm not Kate" "You're not?" "Isn't it ridiculous? You don't really imagine he's - ?" Anne is relaxed around the Keller's; she enters with "Hya, Joe!" - a comfortable family atmosphere. However Kate, the mother figure in the family does not react well to Anne's visit, she is constantly putting her down in front of Chris, and suggests that she has got fat. We hear from the other characters that they are concerned Kate will try and start a fight; furthermore they should now be preparing themselves for an argument over Larry. ...read more.

Even if she does not show it at times Kate loves Anne and Chris, but by loving them she also doesn't want to betray Larry, as this would mean pronouncing him dead. At this point in the play my reaction to the character of Kate Keller is that she is an affectionate mother, whom is simply concerned for the welfare of her family, and chooses not to accept the fact that one of her sons is dead. However her living in denial has made her character become mentally distressed, her personality switches frequently, and she looses control at the slightest thing. She cannot move on, but needs to as everyone else around her already has. Therefore I do agree with the stage direction of Kate given by miller before her initial scene, "...in her early fifties, a woman of uncontrolled inspirations and an overwhelming capacity for love". She has her own dreams, and will not let anyone destroy these. This shows the overwhelming love she carries for her son. The audience also pick up clues that there is something going on we do not quite know of yet, maybe a family secret that they are trying to conceal from the world. If we do find out later on that Kate is infact covering up something in order to save Joe, this will also show her love for her family, and her vast ability to love. ?? ?? ?? ?? Beth Mair English JAG ...read more.