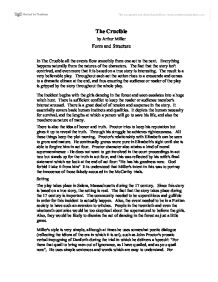 The Crucible by Arthur Miller - Form and Structure

The Crucible by Arthur Miller Form and Structure In The Crucible all the events flow smoothly from one act to the next. Everything happens naturally from the natures of the characters. The fact that the story isn't contrived, and even more that it is based on a true story is interesting. The result is a very believable play. Throughout each act the action rises to a crescendo and comes to a dramatic climax at the end, and thus ensuring the audience or reader of the play is gripped by the story throughout the whole play. The incident begins with the girls dancing in the forest and soon escalates into a huge witch hunt. There is sufficient conflict to keep the reader or audience member's interest aroused. There is a great deal of of tension and suspense in the story. It essentially covers basic human instincts and qualities. It depicts the human necessity for survival, and the lengths at which a person will go to save his life, and also the treacherous nature of many. ...read more.

The community needed to be superstitious and gullible in order for this incident to actually happen. Also, the event needed to be in a Puritan society to have such an aversion to witches. People in the twentieth and even the nineteenth centuries would be too skeptical about the supernatural to believe the girls. Also, they would be likely to dismiss the act of dancing in the forest as just a little game. Miller's style is very simple, although at times he uses somewhat poetic dialogue (reflecting the idiom of the era in which it is set), such as John Proctor's prosaic verbal impugning of Danforth during the trial in which he delivers a 'speech': "For them that quail to bring men out of ignorance, as I have quailed, and as you quail now", He uses simple sentences and words which are easy to understand. For example he brings out the evil quality of Abigail and the other girls and also the gullibility of the judges, His style is easy to understand and should be in order to be successful as a play. ...read more.

As a result, he worked even harder to free the other innocent people, and in the process got himself arrested. Despite this drawback, he did not give up. He had the chance to free himself if he testified against the others but he realized that this would be wrong, and even though he wanted to free himself, he would not if it meant bringing trouble upon others. He cleansed himself at the trial, passing through the 'crucible' of this tribulation and stood for what he knew was right and died a righteous person. Though he distanced himself from the church, he became more pure than the common Puritans, dying as a martyr like the original apostles. He learned what truth meant through his suffering. Through Proctor's struggle, Miller displays the struggles within each of our own hearts. Many times we have witnessed some wrong happening to some other person and wished not to get involved. However, sometimes, like Proctor, there might be something that forces us in. Would we quit after only saving our wife like Proctor could have done, or would we go for the entire community as Proctor did? [1]StartFragment [2]StartFragment ...read more.