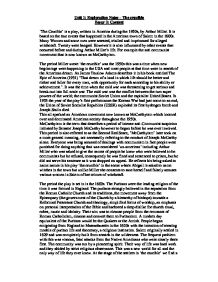 Unit 1: Exploration Notes - The crucible Essay 2: Context 'The Crucible' is a play, written in America during the 1950s, by Arthur Miller. It is based on the true events that happened in the American town of Salem in the 1600s. Many Women and some men were arrested, trialled and imprisoned for alleged witchcraft. Twenty were hanged. However it is also influenced by other events that occurred before and during Arthur Miller's life. For example the anti communist movement that is now known as McCarthyism. The period Miller wrote 'the crucible' was the 1950s this was a time when new beginnings were happening in the USA and most people at that time were in search of the American dream. As James Truslow Adams describes it in his book entitled The Epic of America (1931) "That dream of a land in which life should be better and richer and fuller for every man, with opportunity for each according to his ability or achievement.". It was the time when the cold war was threatening to get serious and break out into full scale war. The cold war was the conflict between the two super powers of the world; the communist Soviet Union and the capitalist United States. ...read more.

There are those within the town with a compelling temptation to rebel and break free from conformity and those who are desperately still trying to enforce the town's harsh rules because they are afraid of the unknown. Witchcraft, the exercise or invocation of alleged supernatural powers to control people or events, practices typically involve sorcery or magic, with the usual intention of harm. In early modern European history there was a mass witch scare; people lived in constant paranoid fear of supernatural activity meaning witchcraft. This terror was injected into people by the church. Christian theology portrayed witches as the servants of satan, who was indecently evil in carnation, witches were the ones responsible for attacking the upright godly and seducing the feeble, in fact they were scapegoats for everything bad that ever happened. So in order to rid themselves of these vermin, similarly to a person killing an innocent spider for the irrational fear of it, people would organise witch hunts with the intention of riding a town or village of all its filth meaning witches. Subsequently witch hunts were very popular from the 1400s to the mid seventeenth century. When a said witch was discovered it often resulted in public hysteria on a large scale. ...read more.

There are still real people who call themselves witches in the 21st century and there are places around the world where witch hunts still take place. To incarcerate or kill someone for being a witch in 2007 would no longer be permitted because it would be seen as prejudice, just as it would be wrong to imprison a person for being black. If I were to stage a play of 'The Crucible' this year I would use realism, but not for the visual, spatial or aural aspects. I would have the set minimalist and use emotive colours with props, of which there would be few. The cast would be dressed basically in brownish colours to reflect the people's Puritanism culture. The props and furniture would be far apart from each other and the actors should use as much of the space as they can when performing. I'd have the actors use modern day accents to imply modern day relevance. All this should be so, so that the audience can use their imaginations to create their own interpretations. Similarly to imagining the story when reading a book. 'The Crucible' is a tragedy. It tells us that people were ignorantly cruel at that time. And that humanity is fallible when it comes down to doing what is morally righteous or saving itself from pain and hurt. ...read more.