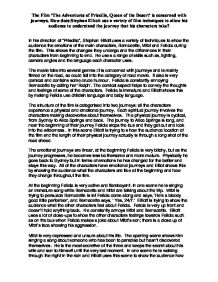 The Film 'The Adventures of Priscilla, Queen of the Desert' is concerned with journeys. How does Stephan Elliott use a variety of film techniques to allow his audience to understand the journey that his characters take?

The Film 'The Adventures of Priscilla, Queen of the Desert' is concerned with journeys. How does Stephan Elliott use a variety of film techniques to allow his audience to understand the journey that his characters take? In his direction of "Priscilla", Stephan Elliott uses a variety of techniques to show the audience the emotions of the main characters, Bernadette, Mitzi and Felicia during the film. This shows the changes they undergo and the differences in their characters from beginning to end. He uses a range of skills such as, lighting, camera angles and the language each character uses. The movie falls into several genres: it is concerned with journeys and is mainly filmed on the road, so could fall into the category of road movie. It also is very comical and contains some crude humour. Felicia is constantly annoying Bernadette by calling her 'Ralph'. The comical aspect helps to convey the thoughts and feelings of some of the characters. Felicia is immature and Elliott shows this by making Felicia use childish language and baby language. The structure of the film is categorised into two journeys: all the characters experience a physical and emotional journey. Each spiritual journey involves the characters making discoveries about themselves. The physical journey is cyclical, from Sydney to Alice Springs and back. ...read more.

Elliott uses close-ups to show the look of desperation in Mitzi's face and to show the audience he is unsure. At the fireside scene Mitzi tells Felicia and Bernadette that he has a wife. Bernadette is calm and seems to accept the fact that Mitzi's married while Felicia starts laughing making jokes. Elliott uses this scene to show the difference in character between Felicia and Bernadette and the acceptance of Mitzi by Bernadette. Bernadette is very sad from the loss of her husband, Trumpet. Near the beginning she is seen talking to Mitzi about how she tried to 'snag a sympathetic husband'. There is a close-up shot of her on the phone in darkness talking to Mitzi and there is a shot showing rain at the window in the background. Then there is a panning shot of some photos to show the audience she has had happier times. She is almost shown as a silhouette in her dark clothes and she uses a mournful town of voice. Elliott uses this scene to show the audience how unhappy Bernadette is. As the play progresses she becomes happier. At the funeral, she is talking to Mitzi about Trumpet as their surroundings are a dark wooded area, but when Mitzi mentions the trip her face lights up and they walk out of the trees into the sunshine. ...read more.

She has developed a bond with Mitzi and they are both sad about leaving each other. There is a close-up of Mitzi and Bernadette hugging and the audience can see Bernadette crying. She is shown in a full body shot wearing white, which contrasts with her outfit at the beginning. Elliott uses these scenes to show how close the two have become and how Bernadette is going to miss Mitzi and going back to Sydney. Mitzi's changes are mostly emotional. He feels glad that his son accepts him for what he is. He is seen wearing real men's clothes and is referred to by Bernadette as 'Butch'. He tries to hide from his son that he's a drag queen. In one scene Mitzi and Benji are sitting by the river and there are a series of close-ups of Mitzi's face showing his inability to reconcile fatherhood and his nervousness. The camera then switches to Benji who is unaffected by his Dad's lifestyle. The camera then switches back to Mitzi and there is a close-up of his face, which shows a change in his expression when he realises Benji's attitude. Elliott uses emotionally intense and subtle music to coincide with Mitzi's feelings. To conclude, I think the best technique used in Elliott's film Priscilla was the way he linked structure with meaning. Using a variety of techniques such as lighting and camera angles, Elliott conveys the characters journeys both physically and emotionally to the audience brilliantly. Tom Matthews ...read more.