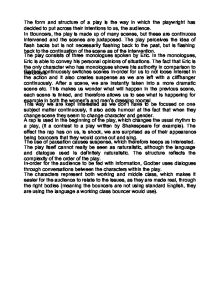 The form and structure of a play is the way in which the playwright has decided to put across their intentions to us, the audience. Bouncers.

The form and structure of a play is the way in which the playwright has decided to put across their intentions to us, the audience. In Bouncers, the play is made up of many scenes, but these are continuous intervened and the scenes are juxtaposed. The play perceives the idea of flash backs but is not necessarily flashing back to the past, but is flashing back to the continuation of the scene as of the intervention. ...read more.

After a scene, we are instantly taken into a more dramatic scene etc. This makes us wonder what will happen in the previous scene, each scene is linked, and therefore allows us to see what is happening for example in both the women's and men's dressing rooms! This way we are kept interested as we don't have to be focused on one subject matter continuously, it also adds humour at the fact that when they change scene they seem to change character and gender. ...read more.

The use of pausation causes suspense, which therefore keeps us interested. The play itself cannot really be seen as naturalistic, although the language and dialogue used is definitely naturalistic. The structure reflects the complexity of the order of the play. In-order for the audience to be fed with information, Godber uses dialogues through conversations between the characters within the play. The characters represent both working and middle class, which makes it easier for the audience to relate to the issues, as they are made real, through the right bodies (meaning the bouncers are not using standard English, they are using the language a working class bouncer would use). ...read more.