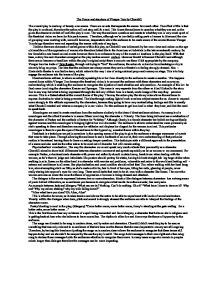 The Forms and structure of Vinegar Tom by Churchill

The Forms and structure of Vinegar Tom by Churchill The overall play is made up of twenty-one scenes. There are no acts that separate the scenes from each other. The effect of this is that the play is continual, therefore the action will not stop until the end. This forces the audience to question what they see and not be given the chance to switch off until the play is over. The way the audience questions and reacts to what they see is very much apart of the theatrical vision we have for this performance. Therefore, although we're inevitably cutting parts of scenes to fit around the size of grouping were working with, were still however, desperate to allow the audience to be made aware of the crucial themes Vinegar Tom brings therefore were not separating the scenes with acts of any type. I believe there are elements of varied genres within this play, as Churchill was influenced by her own views and values on the age old condition of the oppression of women she therefore linked this to the American witch-trials in the late seventeenth century. So her foundation was based on real events however there is no reference to any of the events or locations in the play itself. ...read more.

For the audience to get involved in what they hear, and feel the need to speak back. Monologues are used to create reactions from the audience similarly to the idea of direct audience address. An example of a monologue and the effect it creates is in scene fifteen involving the character of Goody. The lines being delivered are a celebration of the character of Packer and the methods of torture for "witches." Although Goody is a female character her beliefs are hypocritically against women and this monologue is bringing light to her evil character. The audience is able to understand her more personally as she's speaking to them and therefore conveys her attitudes and displays her disgust for the women involved. This particular monologue is there to open the eyes of the audience to the hypocrisy, a central theme within the play. Flashback is a technique we put in ourselves in the opening scene of the play to give the audience a stronger awareness of events that were to take place. Through allowing the audience to see a flashback of an event, their own understanding of that particular section is broadened leaving them to focus on asking deeper questions. ...read more.

Vocally within the dialogue when tone, pitch and accent is strongly stressed the audience are able to interpret the feelings of the characters more. Poetry/chanting is used in the play, (Margery) "Come butter come, come butter come, Jonny's standing at the gate waiting for a butter cake, come butter come..." This is the first time we hear any evidence of a spell being concocted and from Margery, a character that believes she is religious and is getting back at Joan who she believes to have cursed her. The rhythm is effective and it conveys the theme of hypocrisy to the audience. The songs are directed to be sung in modern dress, and by actors not characters. Churchill didn't want the play to be seen as something that was only relevant to an audience of that era because the themes that she was desperate to convey are still ongoing. Therefore, by having this freedom of putting the songs on in modern dress allows the audience to recognise that these issues still happen today and we shouldn't be swayed by the era the play is set it. The songs hold messages in their own right and often using song to declare these messages holds the audiences attention to recognise them more. In many cases songs also remain in peoples minds longer than dialogue therefore the messages can be more impacting. ...read more.