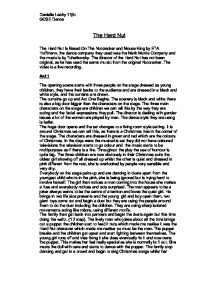 The Hard Nut The Hard Nut Is Based On The Nutcracker and Mouse King by ETA Hoffmann, the dance company they used was the Mark Morris Company and the music is by Tchaikovsky. The director of the Hard Nut has not been original, as he has used the same music from the original Nutcracker. The video is a live recording. Act 1 The opening scene starts with three people on the stage dressed as young children, they have their backs to the audience and are dressed in a black and white style, and the curtains are drawn. The curtains go up and Act One Begins. The scenery is black and white there is also a big door bigger than the characters on the stage. The three main characters on the stage are children we can tell this by the way they are acting and the facial expressions they pull. The director is dealing with gender issues a lot of the women are played by men. The dance style they are using is ballet. The huge door opens and the set changes to a living room style setting. ...read more.

Ballerinas appear on the stage. The name for these are the Cour De Ballet, these are used to fill up the time between the two acts. They are setting the scene of Christmas by throwing glitter acting as snowflakes. They use a lot of different formations but the main one is two circles an inner circle and an outer circle. They also use diagonal lines a lot and cross the lines to make an X shape. They are dancing in unison and cannon quite a lot as well. The music starts to speed up and the girl's uncle walks through the middle of the ballerinas. There is an instrumental played by the musicians for about 5 minutes. Act 2 The scene opens with the couch on the stage with the girl lying on it ill and the maid sitting on a stool sitting next to her reading a magazine. The uncle comes in and starts to spin the couch; the setting is a black and white swirl moving in a circular motion it is trying to set the scene of going into a story. It has now gone back in time looking at the family's life. ...read more.

The characters start to run diagonally across the stage in duets and form a huge circle. The use lots of pirouettes all at the same time and then exit the stage with leaps. It leads to the girl and the nutcracker again, showing that they are deeply in love. They perform another duet and kiss again and again. They use movements to show they are in love like smooth runs and turns. They travel away from each other and come back together showing they are reaching for each other's love! The music becomes grand and they both take centre stage, a new drop down sheet comes down with all different toys on and the music gets faster and faster. They run of and the black and white scene from the start comes back. The stage is now back to the opening scene with the television programme on. The maid comes in going mad and turns the television off. The audience start clapping as the characters come on in duets bow and go through the door apart from the girl and the nutcracker. They finally come on last and the curtain goes up all the characters are in positions and the girl and nutcracker join them. ?? ?? ?? ?? Danielle Leahy 11jfo GCSE Dance ...read more.