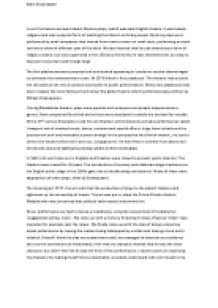 The History of English Theatre

﻿Nalin Dissanayake In our first lesson we learnt about Mystery plays, which was early English theatre, it was heavily religious and was a popular form of teaching the bible to ordinary people. Mystery plays were performed by small companies that moved from town to town on small carts, performing on each cart was a show of different part of the bible. We also learned that Secular drama was a form of religious drama, but was suppressed in the 150s buy Henry VII; he saw entertainment as a way to impress his courtiers and foreign kings. ...read more.

New companies flourished and writers were employed to satisfy the demand for novelty. IN the 17th century King James I and his son Charles I commissioned p private performances called ?masques? which involved music, dance, costume and special effects. Inigo Jones introduced the proscenium arch and moveable scenery arrange in the perspective into British theatre., he used a series of of shutters that slid in and out, using grooves. He even flew in scenery from above and introduced coloured lighting by placing candles behind tinted glass. In 1642 civil war broke out in England and theatres were closed to prevent public disorder. ...read more.

IN our performance we had to devise a melodrama, using the conventions of melodrama: ?exaggerated acting, music. We came up with a story by throwing in ideas of typical ?villain? type scenarios for example: jack the ripper. We finally came up with the idea of doing a detective styled performance by having the maiden being kidnapped by a villain and having a hero and a sidekick. Overall I think the play we created went well, we managed to entertain our audience and use the conventions of melodrama, I felt that my character showed that he was the main character, but didn?t feel like he was the hero of the performance, I need to work on improving my character by making myself more presentable, so people understand who I am meant to be. ...read more.