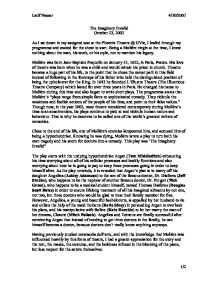 The Imaginary Invalid October 23, 2002 As I sat down in my assigned seat at the Phoenix Theatre @ UVic, I leafed through my programme and waited for the show to start. Being a Moli�re virgin at the time, I knew nothing about the man, his work, or his style, not to mention his legacy. Moli�re was born Jean-Baptiste Poquelin on January 15, 1622, in Paris, France. His love of theatre was born when he was a child and would mimic his priest in church. Theatre became a huge part of his life, to the point that he chose the career path in this field instead of following in the footsteps of his father who held the distinguished position of being the upholsterer for the King. In 1643 he founded L'Illustre Theatre (The Illustrious Theatre Company) which lasted for over three years in Paris. He changed his name to Moli�re during this time and also began to write short plays. ...read more.

However, Angelica, a young and beautiful bachelorette, is appalled by her husband-to-be and enlists the help of the maid Toinette (Katie Siney) in persuading Argan to overlook his plans, and his manipulative wife Beline (Kate Humble) to let her marry the man of her dreams, Cleante (Mitch Pollock). Angelica and Toinette are finally successful after convincing Argan that instead of needing to get three doctors in the family, he can himself become a doctor, because doctors don't really know anything anyways. Having previously studied commedia dell'arte, and with the knowledge that Moli�re was influenced heavily by this form of theatre, I had a greater appreciation for the story and the text, the masks, the costume, and the boldness infused in the blocking of the piece, but less respect for the actors themselves. The story draws somewhat from the commedia stock characters and is basically based around the story of the two lovers, in this case Angelica and Cleante, the female lover's father, Argan, traditionally called Pantalone, who was a miser, ...read more.

The bold blocking, such as the shattering of a glass and Argan's gymnastic display in his chair, left the actors open to a great deal of potential of error which they would have to improvise solutions for. With all they had going for them, on the whole I felt that the actors fell short. They did do well individually, however, in my opinion, they didn't work well enough together. Some actors such as Kate Braidwood who played Louise, the young daughter, and the lawyer did well, but some, such as David Ward who played Beralde and Ashley Adamson who played Angelica disappointed. As for the main character, as the father Argan, Tom Middleditch did well on his own on stage in monologues, but when interacting with other characters on stage, he was too selfish and would upstage them. The mediocre acting was not bad enough to be detrimental to the performance. I enjoyed the show, and I feel that I now better understand Moli�re and understand why he is known as "one of the world's greatest writers of comedies. Latif Nasser 4/30/2007 1/2 ...read more.