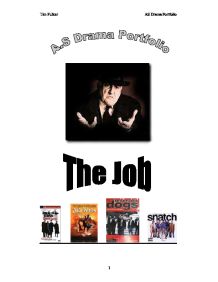 The Job - Dramatic aims and objectives.

The Job Dramatic aims and objectives Our chief dramatic aim was to produce a purely entertaining piece of theatre that was both serious and comical. In our group we intended to devise a character driven piece exploring the personas of criminals and how they reacted with each other under stressful circumstances. In doing so we will try to incorporate a wide variety of dramatic techniques to create a both stimulating and effective piece of realistic theatre. We aimed to engage the audience in a journey through the lives of the criminals by using monologues to tell their personal stories. These stories were going to reveal that these apparently stereotypical "gangsters" are real human beings. In devising this performance, we do not claim to fully understand the world of organised crime and we won't try to answer any questions posed about the lives of criminals. What we will try to do is actually ask the audience the question "Are criminals always bad people?" or "Are criminals any different from the rest of us?" We will try to manipulate the audience's feelings to a more positive view of the people involved in crime by displaying how they came to become criminals. Inspiration, Practitioner and Research AS part of the years AS course we have studied the work of the practitioner Konstantin Sergeievich Alexeieve Stanislavaski. We used several of his rehearsal and character building techniques and ideas to help develop our piece and aid each of us personally to build a unique character. Stanislavaski was born in 1869 into one of the richest families in Russia. Since his first performance experience in 1877, Stanislavaski started making notes on his and other's performances and these notes helped to the development of the "System". Stanislavaski worked on his System for over 30 years and eventually he had developed a structured pattern of rehearsal techniques an actor should follow to give a "real" performance. ...read more.

We came up with this diagram to show this. Having our characters established and their relationships with each other decided on, we began to improvise scenes. This was helpful as we began to express our status and the way in which we acted towards each other. We also began to build on the physicality of our characters, developing movement, idiosyncrasies and voices. Although this helped us develop our characters we found that we all moved and talked very much at the same pace which led to any action on stage being very one dimensional. To avoid this we decided to do some very intense workshops on Action (Stanislavaski). Action was one of Stanislavaski's more important elements of the system. According to Stanislavaski there are two types of action; action for the sake of it (outward action in it's physical form) and action that can be seen as action due to a concentrated stillness on stage (inner intensity). Stanislavaski noted that there is never a point where an actor is onstage and is not engaged in the process of enactment, but at the same time he suggests that there always must be a purpose. "Do not run for the sake of running, or suffer for the sake of suffering. Don't act "in general", for the sake of action; always act with a purpose." In other words every action onstage (inner or outer) must have a reason. Why am I coming through this door? What is my purpose? What is behind this door? How might I approach the door? To adapt this idea to our rehearsals, we used our given circumstances (character histories from hot-seating exercise) to give reasons for our action onstage and our behaviour towards others. Our first exercise was to practice entering the space for the first time in the play. We wanted our individual characters to be shown in this first moment so we had to find a way of entering the space at different tempo's and with different ways of walking. ...read more.

In the end, I thought that the fight scene was one of the tightest and most exciting scenes in the performance. As a whole group our main weakness was that we found it very hard to stay focussed, as we are all very good friends. We overcame this problem when we began to realise that the play wasn't as good as it should have been. Group strengths involved the sensitivity in which we regarded each other's acting and our ability to work well in a group. When improvising a scene for a first time, we always found that it was very funny. Although we wanted something comical we wanted to use black comedy, as we wanted to convey a serious side too. This sometimes became difficult as sometimes jokes were milked throughout the performance. In our group we managed with to satisfy all dramatic aims and objectives as we had a piece that was both comical and serious. We all were able to break the stereotypical image of a criminal and instead opened the audiences eyes to a homosexual psycho, an unstable interrogator and an incompetent boss. Health and Safety During preparation and rehearsal we took certain measures to ensure that our acting space was a safe environment and that all props and the set had been checked for any potential hazards. Smoking: We made sure that several ashtrays were present on the set and in each ashtray we put a small amount of water in to make sure the cigarettes are distinguished. Guns: As we had very realistic guns we had to take several precautions. When we weren't rehearsing they were stored in a safe place. When using the gun we had to be careful that we didn't hold it close to our faces or point it directly at people as the guns made sparks when fired. Rostra: These were weighed down by stage weights to prevent them from toppling over. Lighting: As a main concern in theatre, we got our teacher to check over the rigging to make sure it was safe. ...read more.