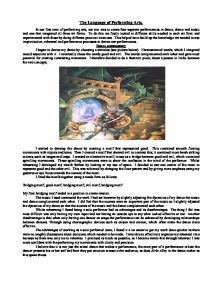 The Language of Performing Arts.

The Language of Performing Arts. In our first term of performing arts, our aim was to create four separate performances in dance, drama and music and one that integrated all three art forms. To do this we firstly looked at different skills needed in each art form and experimented with these by doing different practical exercises. This helped us to build up the knowledge we needed to use improvisation, rehearsal and performance processes to devise our performances. Dance commentary I began to devise my dance by choosing a stimulus (see picture below). I brainstormed words, which I imagined would associate with it. I eventually chose the words good and evil. The words complemented each other and gave most potential for creating contrasting movement. I therefore decided to do a thematic piece, about a person in limbo between the two concepts. I started to develop the dance by creating a motif that represented good. This contained smooth flowing movements with triplets and turns. Then I created a motif that showed evil to contrast this; it contained more harsh striking actions, such as lunges and leaps. I created an alternative motif, to use as a bridge between good and evil, which contained spiralling movements. These spiralling movements were to show the confusion in the mind of the performer. Whilst rehearsing I developed my motifs further by looking at my use of space. I decided to use one corner of the room to represent good and the other evil. This was achieved by changing the floor pattern and by giving more emphasis using my gestures or eye focus towards the corners of the room. ...read more.

Overall our performance went well. It think that it effected the audience in the way which we intended, for example the audience felt sympathy for the character which I played. I especially enjoyed performing the beginning sequence as I found that this the most challenging part to get right. When we performed the beginning sequence, I don't feel we did as well as in rehearsal, but I still think it got across what we wanted to show. Music commentary For my first music piece, I knew that I was going to sing a song. Before I even considered what song to sing I researched different voice training techniques. I knew that if my voice wasn't warmed up before I started to sing the song would sound ineffective. I did exercises that improved airflow and diaphragmatic support. I sang scales and concentrated a lot on my breathing. I performed the song Torn by Natalie Imbruglia. I began by looking through a wide variety of backing tracks from the Internet. I chose three midi files to rehearse to so that I could see which one I liked and suited my voice the best. I took the songs Torn, You've got a friend by Carol King and What Can I Do? by the Corrs. I researched the original songs so I could listen to their vocal styles and more specifically the tone quality of their voices and how they were used to create the emotion in the songs. I found that Torn showed the most emotion and had a wider range of dynamics so I chose to focus on rehearsing this song. ...read more.

We did not think about having a set meter or rhythm we just improvised and played the notes when we felt the time was right, When rehearsing we had to concentrate on aspects such as group awareness this was an essential factor especially in our dance as in our developed dead body motif. We all had to run off and on stage to support each dancers body we had to watch the other dancers and be careful on our timing so as no to let another dancer fall. For our actual performance we had to practise our projection of the voice for our first and last sections as if the audience could not hear us the performance would lose its effect. I think that we gave the opportunity to see a different way in which war effects people other than the usual story of the soldiers on the front line. There were many last minute changes due to our in effective rehearsal planning, we coped with them very well and remembered all the things that we had to do. We prepared for our performance by marking in the space to make sure we knew all the changes. Conclusion By looking at improvising and rehearsal techniques and performing the four pieces, I have found there are definite links between art forms. For example when choreographing a dance the dancer must be aware of timing, rhythm and dynamics which are musical terms, and they may also need to be in character to show relationship and/or emotion in a dance. Combining the art forms also makes a piece of performance more visual for an audience and allows the performers to consider the most appropriate medium for creating a mood or idea. ...read more.