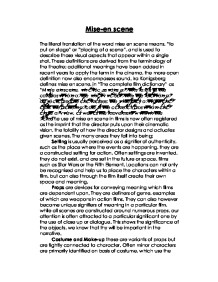 The literal translation of the word mise en scene means,

Mise-en scene The literal translation of the word mise en scene means, "to put on stage" or "placing of a scene", and is used to describe those visual aspects that appear within a single shot. These definitions are derived from the terminology of the theatre; additional meanings have been added in recent years to apply the term in the cinema, the more open definition now also encompasses sound. Ira Konigsberg defines mise en scene, in "The complete film dictionary" as "Mise en scene, in discussions of film, refers to the composition of the individual film, the relation of objects, people and masses; the interplay of light and dark; the pattern of colour; the camera's position and angle of view, as well as the movement within the frame". ...read more.

Often settings are invented, they do not exist, and are set in the future or space, films such as Star Wars or the Fifth Element. Locations can not only be recognised and help us to place the characters within a film, but can also through the film itself create their own space and meaning. Props are devices for conveying meaning which films are dependent upon. They are definers of genre, examples of which are weapons in action films. They can also however become unique signifiers of meaning in a particular film, while all scenes are constructed around numerous props, our attention is often attracted to a particular significant one by the use of close up or dialogue. ...read more.

While lighting is apparent in shots, the lighting is shot off camera, even for locations outside lighting is used to ensure an adequate level of light to produce a sufficient level for recording and highlight particular aspects of an image. Performance and Movement can be further split into i) Acting and actuality ii) Functions and motivation This is probably the richest form of mise en scene; it helps for the performer to be an object for the camera's gaze, whether human or animal. As with costume there is a strong coded element in the facial and body expressions of performers, the body language used, which can be used to express both change in emotion and change in time. ...read more.