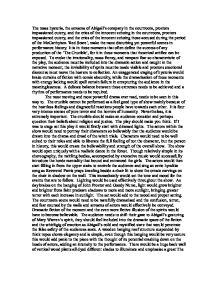 The most moving and most powerful drama ever read, needs to be seen in this way to. The crucible cannot be performed as a feel good type of show

The show would open uniquely with a realistic dance in the forest. Though relatively simple in its choreography, the twirling bodies, accompanied by evocative music would successfully introduce the horde mentality that bound and entranced the girls. The actors would then start filling in from the upper stairs to encircle the audience and sing an eerie hymlike song as Reverend Parris prays kneeling beside a chair lit to show the ornate carvings on the chair in shadow on the wall. This immediately would set the tone and mood for the events that are to follow. Lighting would be used effectively throughout the show. As day brakes on the hanging of John Proctor and Goody Nurse, light would grow brighter and brighter from faint predawn shadows to more and more sunlight, bringing greater terror with each increase in sunlight. The set would add to the mood and proper setting. The courtroom scene would need to be tastefully dramatised and the confusion, terror, and fear coursed by the wails and screams of actors would effectively be conveyed. ...read more.

A succesfull staging of the crucible requies a corporealistaion of the verbal text on the stage. The text's embedded metaphors and invocative lines musr assume signification from page top stage. This makes the power of millers play. are all feeling within a small theatre. The floor would be laid patterned woodwork, both the raised stage in the centre and the edging around it. With very little other set than a few benches, a table, and a cot for one scene, the floor and wall would be most important for creating a clear poignant feeling and setting. There would clearly be one entrance to the room that the raised part identified, and this entrance location would need to change depending which room the scene took place in. The ending of the forth scene would need to be acted with moving strength, this would be done with each name of those hanged spoken aloud slowly and solemnly by individual members of the ensemble, who would again encircle the audience. As each name would be spoken, a drum beat would be added and goody proctor would collapse a fragment more, echoing the devastation felt by all the audience. ...read more.