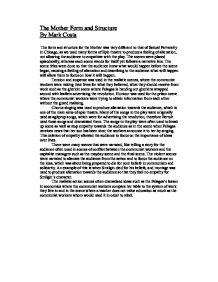 The Mother Form and Structure.

The Mother Form and Structure By Mark Costa The form and structure for the Mother was very different to that of s****l Perversity in Chicago, as we used many forms of Epic theatre to produce a feeling of alienation, not allowing the audience to empathize with the play. The scenes were placed episodically, whereas each scene stands for itself yet follows a narrative line. The scene titles were done so that the audience knew what would happen before the scene began, causing a feeling of alienation and describing to the audience what will happen will allow them to focus on how it will happen. ...read more.

Humour was used for the prison scene where the communist workers were trying to obtain information from each other without the guard realising. Chorus singing was used to produce alienation towards the audience, which is one of the main aims of epic theatre. Many of the songs in the play were originally used as agitprop songs, which were for advertising the revolution, therefore Bertolt used these songs and dramatised them. The songs in the play were often used to break up scene as well as stop empathy towards the audience as in the scene when Pelagea receives news that her son has been shot; the workers announce it to her by singing. ...read more.

The violent scenes were narrated to alienate the audience from the action and to focus the audience on the idea, which was about being prepared to die for your beliefs in communism and solidarity. An example of this is when Smilgin died for his beliefs, and montage was used to produce alienation towards the audience so that they feel no empathy for Smilgin's character. The realistic action scenes often-dramatised ideas such as the Pelagea's lesson in economics where the communist workers compare her table to the system of work they live in and in the scene where a teacher does not value education as much as the communist workers whom would need it in order to rebel. ...read more.