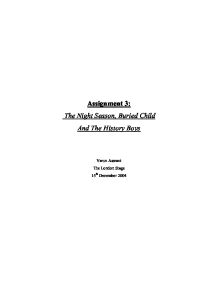 The Night Season, Buried Child And The History Boys

Assignment 3: The Night Season, Buried Child And The History Boys Varun Aswani The London Stage 15th December 2004 The Royal National Theatre receives financial assistance from Arts Council England. With aid from the Arts Council, the National Theatre tends to show theatre that does not attract audiences for grossing profits; however, they provide thought provoking plays which are brilliant pieces of art. With that in mind, it so happens that more than half its income is self-generated. I had the opportunity to enjoy three productions; The Night Season, Buried Child and The History Boys. Rebecca Lenkiewicz's Night Season is a new play that takes you on what you think will be a familiar journey, but offers pleasant little surprises at almost every turn. Her characters are three generations of a disputatious Irish family in County Sligo. One wouldn't think, though, that this household had much to humour about, however we are entertained by continuous swearing and uncontrollable laughter. The play is set in a modern studio theatre with one main set used in different acts as different environments. The lighting is set to a cosy mood to make one feel part of this close-knit family. The play begins by introducing us to grandmother Lily. Lily has been given a few months to live, feckless dad Patrick is a champion boozer, while his three daughters, Judith, Rose and Maud haven't got over their mother's desertion of the family 15 years earlier and their constant romantic problems. ...read more.

Meanwhile, back on the sofa, grumpy Dodge chips away at his pleasurable memories while swigging at a whisky bottle he hides under the sofa. Thereafter Tilden enters, their son, carrying a huge amount of corn cobs. Tilden rips off the outer leaves of the corn as he listens to his mother's complaining and cracks off the stalks. Tilden's experience with his parents can be interpreted in many ways. His parents refuse to believe that he has not stolen the corn and continuously treat him with complete disrespect. His parents know that he served two years in prison, and have lost belief in his ability to change and become independent. Once Tilden finishes peeling his corn, Halie enters the ground floor. Dressed for a fashionable funeral she steps through the sitting room into the incessant rain to meet with her boyfriend, the priest. The situation becomes even more awkward when Bradley enters with a wooden leg and a habit for shaving his father's hair off in clumps and leaving grazed areas of his scalp, while the unsuspecting father sleeps. Vince and his girlfriend Shelly, stumble into this atmosphere on their way from New York to New Mexico to visit Vince's father, Tilden. At that point they do not know that Tilden has moved back home to Illinois. Shelly is, like us, an outsider, a sane member of society thrown into this strange house. ...read more.

Posner did not have a profession and did not want to progress in his life, he kept to himself at home. Bennett left us to believe following Hector's ideology will leave you with no progress, no career, just loneliness as no one else is in support of this view. Dakin on the other hand, is a successful lawyer because he grew close to Irwin and followed his approach to life. Each actor's performance sparked great emotion; The History Boys is a loving heartfelt comedy that enchants as it entertains. If a choice to be present at one of the plays had to be made between the three, I would choose Buried Child. All the actors capture the mood of surreal surroundings. M Emmet Walsh's Dodge is a parodic icon of the distant past. Brendan Coyle's Tilden, clutching armfuls of corn, is both comic and menacing. But the skill of the production lies in its reminder, under the laughter, of the deadly secrets we all of us choose to bury. The play contains all factors necessary that make it a great piece of theatre. Shepard has a negative view of the family and this tragic-comedy contains one of its darkest portrayals. The family is a place that buries all its children under the weight of its past. Vince returns to his home to seek happy memories of family life only to discover that no one else shares them, and now he has returned home neither does he. ...read more.